G.I Joe, which is now a media franchise, originally began as a toy line created by Hasbro in February 1962. The original toy line aimed to resemble members of the United States Armed Forces. For instance, there were toys of members of the Army, The Navy, the Air Force, and The Marines.

Hasbro intended to create a line of poseable toys, primarily to appeal to boys. To break away from the norm of dolls, which appealed to girls, Hasbro looked for a new angle. In this light, Hasbro created articulated toys that allowed the poseable feature. They then christened this new creation Action Figures. Action figures subsequently became a genre for articulated and poseable toys.

Thus, with the creation of G.I. Joe, Hasbro introduced the world to the concept of the action figure. Since its debut, multiple other lines spawned from the original G.I. Joe toy, including the Transformers.

Presenting the top ten Hasbro G.I Joe toys, with our major focus being on the toy line produced in the 1980s.

The Cobra Rattler action box contains one of the COBRA deadly attack Jets and the driver Wild Weasel. Hasbro released the action box in 1984 as part of the third series of the G.I Joe – Classic Collection.

The Cobra Rattler figure features some super realistic details. The canopy on the Cobra Rattler can open and close. The figure’s wheels are rollable, and its landing gears are retractable. The cockpit can accommodate most of all the GI action figures as well as the turret too. The figure came with fourteen removable combat rockets and bombs. The Kerry cannon also rotates as well as the jet engines and wings which can rotate up to 90 degrees to mimic vertical take-off and landing.

The Cobra Rattler is extremely sturdy, though it has some fragile parts, to withstand rugged role play. The Cobra Rattler’s pilot, Wild Weasel, has a reputation as an excellent fighter pilot befitting one of Cobra’s most advanced weapons.

The Storm Shadow action figure is a fully articulated action figure that Hasbro released in 1984 as part of the third series of G.I Joe Classic Collection toys. The action figure has an array of weapons that includes a black bow, a black katana sword, a black wakizashi, and a black Nunchakus. Storm Shadow also came with a black backpack that could open into two and contain all the weapons.

Storm Shadow originates from the family of an ancient and extinct clan of ninja assassins. He possesses all the major ninja skills and is also a master swordsman, skilled in throwing stars and nunchakus sticks, among other things.

The Cobra Commander action figure is a fully articulated 3.75-inch figure. Hasbro released it as part of the sixth series of their G.I Joe toys in 1987. The action figure features a black mouthpiece, a black automatic assault pistol, and a silver-colored life support backpack.

Cobra Commander is a Cobra member who is a ruthless, carefree commander of the Cobra forces. To keep him safe whenever he goes to battle against the Joes, the Cobra Commander built a special suit of armor whose make used beryllium steel plate and polymer materials. This suit is a sophisticated impregnable body armor capable of repelling a direct hit from a machine gun.

The Combat Jet Skystriker (XP-14F) box contains the magnificent combat jet figure and Ace, the pilot of this vehicle. Hasbro released the box figure in 1983 as part of the second series of the G.I Joe – Classic Collection. Hasbro may have based the XP-14F Sky Striker on a United States Army’s top-secret weapon systems.

It features realistic details like its highly detailed instrument panel, soft plastic nose, rollable tires, and the canopy opens and closes. There are parachutes attached to the removable seats, which can house a couple of action figures. Also, the figure comes with about six missiles. When you remove the two access panels on the wings, it reveals the hydraulic details of the figure. The tires rise into the body of the jet, and the wings sweep back when the side lever slides forward.

The Baroness action figure is a fully articulated action figure that Hasbro released in 1984. It was part of the third series of G.I Joe Classic Collection toys. The action figure comes with a black laser rifle and a black backpack.

Baroness is a spoilt brat of a very wealthy European noble. Initially expressing her defiance to the regular norm as a student radical, she moved her agenda to the world stage by joining the Cobra Organization. Baroness is an expert in numerous weapons, including the Uzi, M-16, and the AKs. The Baroness also has split loyalty between Cobra Commander and Destro.

Hasbro released the fully articulated Firefly action figure in 1984 as part of the third series of their G.I Joe – Classic Collection action toy lines. The 3.75 inches’ action figure comes with a submachine gun, a colored walkie-talkie, a backpack, and a backpack cover.

Firefly is a mercenary who specializes in bombs and explosives. He is infamous for his techniques and how he affects a maximum number of casualties in his attacks by picking strategic and most densely populated areas.

Firefly’s identity remains a secret as no one knows who he is or what he looks like. So, not even his most powerful clients like Cobra Commander knows who Firefly is. To help keep his identity a secret, he receives his payments through an untraceable Swiss bank account before he completes his missions.

Firefly is an expert infiltrator as no one has ever seen him nor caught him on camera entering or exiting any of his crime scenes. He is a master of his trade.

Hasbro released the fully articulated Lady Jaye action figure in 1985 as part of the fourth series of their G.I Joe – Classic Collection toys. The action figure came with a green backpack, a green surveillance camera, and a gray-colored power javelin. Lady Jaye’s action figure also featured a detailed paint job that accentuated her green jumpsuit with a black belt, a pair of black hand gloves, and black boots.

Lady Jaye was a successful actress and an excellent linguist being able to speak more than five different languages. These attributes make her an outstanding master of disguise, assuming any identity by being the character physically and by speech. She also is a qualified Airborne Ranger. She is a master of numerous weapons, including a crossbow.

Having started her martial arts training very early in her life, Scarlett possesses numerous black belts. Her long years of military training in Ranger, Special Ops, and Sniper schools make her a deadly operative. Scarlett also has the mastery of many weapons that include a lot of M-series weapons, including the M-700 Remington Sniper Rifle. However, she favors a power crossbow and throwing stars.

The Destro’s Despoiler is an action pack that Hasbro released in 1988 as part of the seventh series of G.I Joe – Classic Collection. A fully articulated Destro action figure, which serves as the vehicle’s driver, accompanies the Despoiler. The Destro’s Despoiler features some very realistic details like the Bat Wing Stabilizers, Air to Surface and Air to Air missiles, pivoting double laser gun, and its thick build enables rugged role play. The action pack also contains the G.I Joe folder, label sheets, instructions, and blueprints. The Destro action figure in this pack has full articulation and comes with a gold sword and a red cape.

Destro originated from a lengthy line of weapons dealers who wears a steel mask initially as punishment, but now it is a family symbol and a thing of pride. Destro is a businessman that dwells in chaos to sell his weapons.

Hasbro released the fully articulated Snake Eyes action figure in 1989 as part of the eighth series of their G.I Joe toys. The action figure comes with a silver blowgun, a set of three Nunchaku, a black backpack, a gray Uzi machine gun, and a silver sword.

Snake Eyes is a very skilled and well-trained Army Ranger who graduated from Recondo School. He has also trained in martial arts with a Ninja Family. Snake Eyes is an expert in all NATO arms and a black belt in about a dozen fighting systems, and he is also a master swordsman.

Ever since Hasbro reenergized the G.I. Joe brand in the 1980s, the Joes and Cobra have been duking it out. Even to this day, you can find Hasbro’s newly released G.I. Joe toys such as Cobra Commander. So, there are always new contenders for the number one G.I. Joe toy.

Do you have old and used G.I. Joe toys?

If you have a collection of old and used toys, you can turn those toys into cash. There is no reason to let those old toys collect dust. Contact us today to sell your G.I. Joe toy collection. 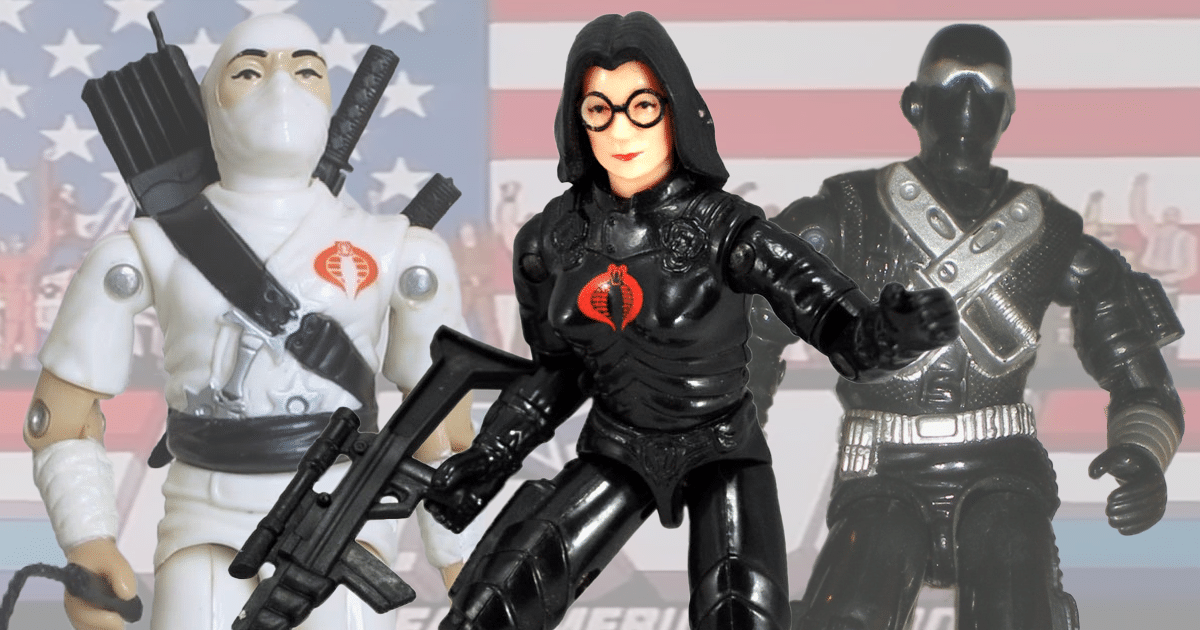