The Xena: Warrior Princess television series was a commercial success and received a wild reception by viewers around the world and across different age groups. This popularity caused Toy Biz, who had earlier produced a toy line for Hercules: The Legendary Journeys, to create a line of toys for Xena: Warrior Princess from 1998 to 1999.

The Xena: Warrior Princess toy lines include both action figures and dolls created in 6 inches and 12 inches, respectively. The toys were also custom-made according to how the character appeared in a particular episode, with the episode review or the character’s part printed on the back of the toy pack.

Toy Biz released the Deluxe Xena action figure as part of the Hercules: The Legendary Journeys action toy line in 1996. This toy came out about a couple of years before the Xena: Warrior Princess aired. So, Toy Biz modeled this action figure after Xena’s cameo appearances in Hercules: The Legendary Journeys television series. Thus, the figure shares a likeness with Xena’s actress, Lucy Lawless.

The Deluxe Xena action figure comes packed with removable armor made of rubber. Moreover, a civilian outfit can substitute this armor. Thankfully, Toy Biz included detailed instructions on how to change the figure’s outfits at the back of the pack. A chakram and a sword also come with a ten-inch tall and fully articulated figure.

Toy Biz released the Gabrielle (Amazon Princess) doll in 1998 as part of the first wave of 12-inch dolls. The 12-inch doll is a replica of Xena’s trusted companion and eventual love interest, Gabrielle. Thus, this figure resembles Gabrielle’s actress, Renee O’Connor, and resembles her appearance in the episode titled The Quest.

The Gabrielle doll features articulation in some specific parts of the figure like the shoulders, the waist, and the neck. The figure has very realistic and rooted hair, outfits made of real cloth and suede materials, while the plastic wrist armor. The figure comes with a removable well-detailed Amazonian headdress and Gabrielle’s signature staff.

Toy Biz released their Callisto doll in 1998 as the concluding part of the first wave of 12-inch dolls that also include the Xena doll and Gabrielle doll. The doll is a replica of the Callisto character that Hudson Leick portrayed in Xena: Warrior Princess. She first appeared in the 22nd episode titled Callisto.

The Callisto doll wears an all-black attire made from real clothing materials, and her hair also looks very real and deeply rooted in the doll’s head. The beautiful Callisto doll comes with a sword and a small knife too.

The doll wears a black removable attire with a patterned design and wrist armor made from real clothing materials. The Ares doll features articulation in significant areas to make the doll very posable. Also, it comes with a large sword along with its sheath.

In the series, Ares, the god of war, had a vital role in the life of the main protagonist, Xena. Initially, Ares was her mentor while she was still a blood-hungry warlord. Later, Ares became a constant threat, always looking to foil her efforts at redemption.

Toy Biz released their Evil Xena doll in 1999 as part of the third and final wave of the 12-inch dolls. Unfortunately, it was one of only three dolls released in this wave.

The 12-inch Evil Xena doll is a replica of the Evil Xena character that Lucy Lawless portrayed in the episode titled Armageddon Now Part II. Thus, the facial structure of the doll is remarkably like that of Lucy Lawless, with the doll adorned with realistic hair rooted in the doll’s head. The doll also comes with a golden headdress, Xena’s signature sword, and her chakram.

Armageddon Now Part II shows Callisto went back in time on a mission to execute Dahak’s evil plan. This allowed us to take a glimpse at the evil Xena in her warlord prime years.

Autolycus is one of Xena’s companions who helped her retrieve a powerful weapon that belongs to Kelton, the leader of a traveling tribe, from the evil warlord Malthus. The Autolycus action figure is also the only male action figure produced among the 6 inches Xena: Warrior Princess action figures.

The 6-inch Velasca action figure is based on the Velasca character that Melinda Clarke portrayed in the episode, The Quest. The Velasca action figure comes with a removable Amazonian tribal mask/headdress, a dagger, and a portion of Ambrosia with an Ambrosia safe playset. Owners of this figure can store the ambrosia in the safe, while the dagger serves as the key to opening it.

Velasca was one of Xena’s many adversaries. She fought Xena to her death while trying to take Ambrosia for selfish reasons.

Apart from the face, the action figure is one of the best action figures in the whole toy line. Its detailed costume to its multiple points of articulation makes the action figure very poseable. The Callisto action figure comes with a base that enables the figure to perform the spinning attack action, a sword, a dagger, a weapon staff, and three nunchakus.

Callisto is the ruthless leader of gang warriors and falsely claims to be Xena to tarnish Xena’s image. Callisto and Xena then face off in a fierce encounter that occurred in the episode title Callisto.

The Gabrielle action figure wears a removable, white-colored robe made exclusively from fabric materials. The action figure also comes with her trademark weapon staff and a replica of Gabrielle’s daughter, Hope.

The episode shows a grieving Gabrielle who had just lost her daughter and betrayed her companion’s trust returned to her Amazon sister. She was, however, hunted down by Xena and the two fought each other.

Let us know what your favorite Xena: Warrior Princess toys are.

Do you have old and used Xena: Warrior Princess toys?

If you have a collection of old and used toys, you can turn those toys into cash. There is no reason to let those old toys collect dust. Contact us today to sell your Xena: Warrior Princess toy collection. 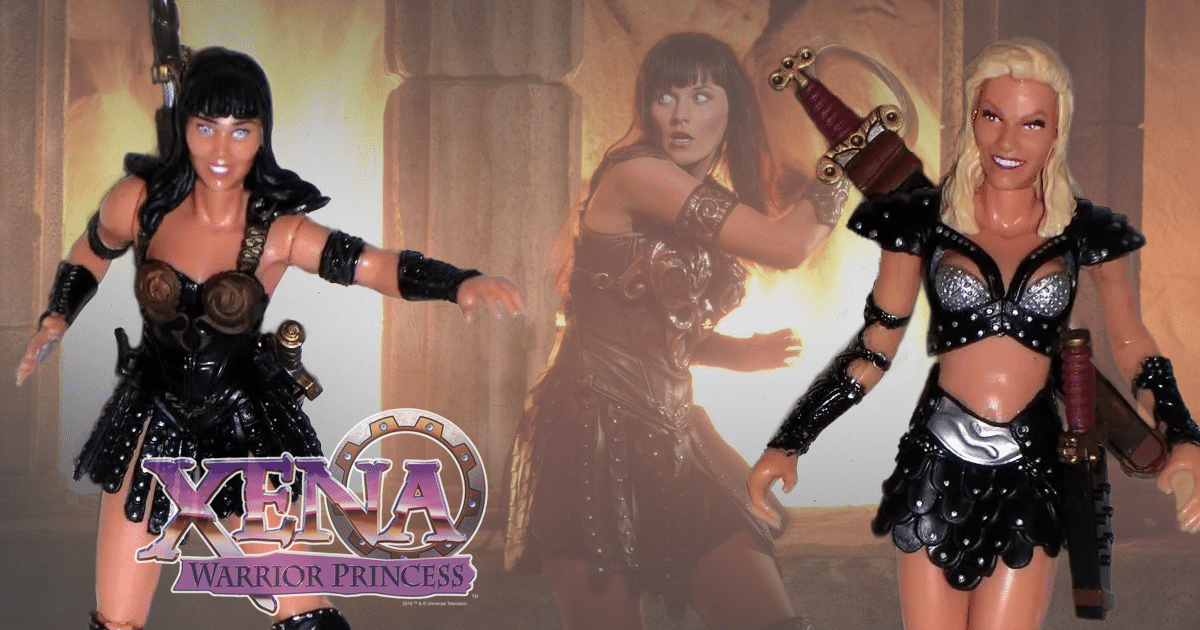