Eventually, Tonka then obtained the rights from Bandai. So, they made some adjustments to the animated series, then created an awesome but sadly short-lived toy line.

To set up his authority and further his plan of total world domination, the mad scientist created a special evil assault team that includes criminals and named them Black Widows. To defeat the mad scientist and his team of supervillains, the remaining half of the world also came together to form their elite team of Earth’s most powerful soldiers and named them Zone Riders.

Both the animated series and toy line show these two forces fighting against each other. The Zone Riders are the good side, while the Black Widows are the evil side.

Only Tonka held the rights to produce Spiral Zone toys in America. So, they produced a very well-accepted toy line that unfortunately only lasted for one wave of release. The toy line includes fully articulated 7 inches’ action figures, four vehicles, some added weapons and accessories, and some suits that could fit any of the action figures.

The Sledge Hammer tank is the main battle vehicle of the Black Widows. As such, the figure can carry one of the many action figures produced in the toy line, preferably a Black Widows member.

Tonka released the Zone Rider Armored Combat Cycle in 1987 as one of only two Zone Riders action vehicles for the Spiral Zone toy line. This Cycle is a mono-wheel cycle and replica of the Zone Riders’ favorite vehicle. The Zone Riders use the one-wheeled vehicle in several operations in the zoned area, such as search, rescue, and even battle. The Zone Riders favor this cycle because of its speed and ability to swiftly maneuver obstacles while maintaining its high speed.

The action vehicle can house one action figure at a time, but this time, it must be a Zone Rider to sync with the storyline. The action vehicle comes with two heavy-duty machine guns strategically mounted on the front of the action vehicle and a spring-loaded laser cannon that can fire backward as well as forward when flipped.

Tonka designed the Bull Whip with Overlord, the leader of the evil Black Widows, as the intended driver. Thus, the vehicle accommodates one action figure that is supposed to be Overlord according to the lore.

The figure’s wheels are moveable, and it comes with a spring-loaded whip that can launch from the front of the figure. The figure also has a hidden compartment that houses a spring-loaded rocket launcher.

Tonka released the Bandit action figure in 1987 as one of the Black Widows soldiers in the Spiral Zone toy line. Bandit was a high-ranking Black Widow soldier, second only to Overlord himself. He is the ultimate master of disguise who can alter his physical appearance and voice to mimic anyone.

The Bandit action figure comes with an array of accessories that includes a microwave communication system, bulletproof chest armor, bulletproof boots, and a removable zone camouflage suit. The figure also has a chest-mounted hand weapon, a helmet, and a pistol that the figure can holster in its boots.

The Sergeant Tank Schmidt action figure comes with a series of accessories. These accessories include a removable army camouflage suit and a helmet. He also features a removable backpack that also serves as a communication system. The figure also comes with a pistol and a rocket launcher.

Duchess Dire is a troublesome spoilt brat from a very wealthy family. In a bid to join the Black Widows, she walked into the Zone intentionally.

The Duchess Dire action figure comes with a Zone camouflage suit and a helmet. She also has a backpack that serves as a microwave communication system. The figure’s pistol can remain holstered in her bulletproof boots. Then, she has removable bulletproof chest armor, and a riffle, among other things.

Tonka released the Lieutenant Max Jones action figure in 1987 as one of the three Zone Riders figures in the Spiral Zone toy line. Lieutenant Max Jones is one of the best soldiers in the United States military. He even has many accolades for bravery during battle. He had also previously served under Colonel Dirk Courage. The fight against the Black Widow is very personal to Max Jones. Unfortunately, his father, mother, and sister remain captives in the Zone.

The Lieutenant Max Jones action figure features a removable light-colored army camouflage suit with his white-colored accessories. These accessories include a long rifle and a pistol that can store in the right boot. He also comes with removable bulletproof chest armor and two wrist armor gauntlets.

Tonka released the Overlord action figure in 1987 as the leader of the Black Widows and the brilliant mad scientist that created the Zone. He had once pitched the idea for the zones to the United States government, but they turned down his proposal. Thus, Overlord hijacked a newly developed space shuttle and used it to disperse his Zone Generators before they shut them down. He, however, had successfully zoned half of the world.

The action figure comes with a removable khaki cloth outfit, a removable backpack that has two guns strategically mounted on the shoulders, and a handheld pistol. The figure also features removable body armor and two wrist gauntlets, with a helmet and another small pistol holstered in the right boot.

Since the Spiral Zone toy line only lasted for a year, these toys have become rare and valuable collector’s items. Let us know if your favorite Spiral Zone toys made it to our list.

Do you have old and used Spiral Zone toys?

If you have a collection of old and used toys, you can turn those toys into cash. So, there is no reason to let those old toys collect dust. Contact us today to sell your Spiral Zone toy collection. 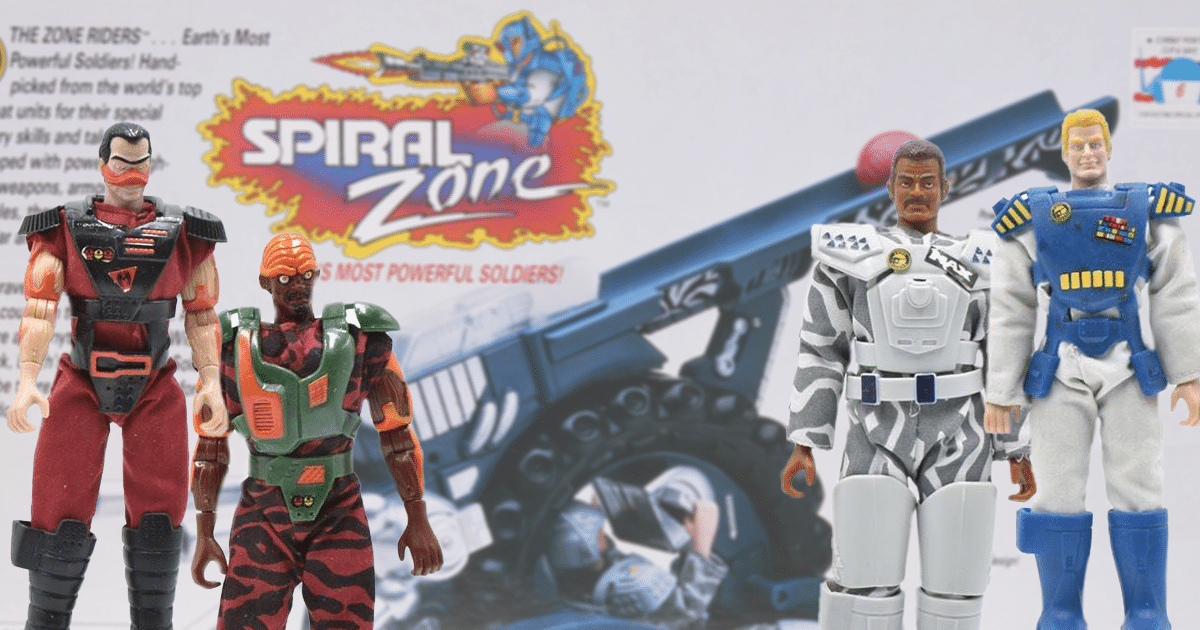