First, before we dig too far into this, rarest and valuable are not the same. Nor are some of the hardest to find in loose, near mint condition necessarily on this list.  Some on this list lend themselves to being found loose in great shape such as Bludgeon. What this list amounts to is after 20 years of buying Transformers, the ones I saw the fewest of!

I also need to state that this list only applies to loose figures and those figures from the USA. 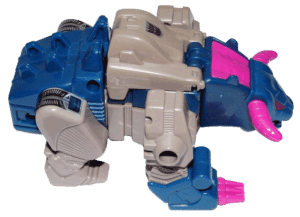 Due to a design flaw (which KO’ed about 50% of the supply), the bot that smashes all that stands in his way is usually in sad sorry shape, looking like he got trampled himself. Being headless tends to look like that!  While there are not really less of them than the other 5 1988 Headmasters, I feel I should give him the nod at #10 given the other 5 1988 Headmasters don’t have any breakage issues at all. All the “snorting, and belching” didn’t help his case when the designers put him together.  Though his mood might be more closely related to the fact he was Binary-bonded to the Nebulan, Kreb, a former talk show host who was just obnoxious! 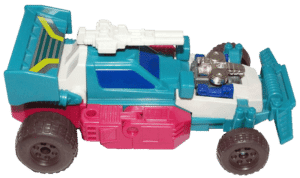 “Enjoy each moment like it’s your last.” This reckless racing robot appears to have lost sight of the trail and the majority disappeared into the dunes.  I see at least 3 if not 4 Slapdash Powermasters for every one Joyride. His out of control driving must be the culprit!  Binary-bonded to the Nebulan, Hotwire, a reformed car thief and ace mechanic. I guess they are off on a joy ride! 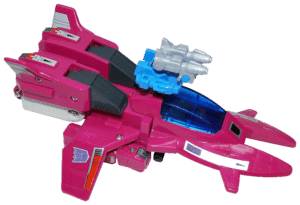 “Keep shooting, eventually, you’re bound to hit something.”  A robot that has bad aim and leaves his comrades running for cover.  That definitely sounds like I want him on my team!  Worse than that, he’s paired with Aimless, a coward of a Nebulan, which just might explain the disappearance of this figure from collections. All the Decepticon Targetmasters seem to be in short supply. In the photo, you can observe the common issue on all the 1987 Decepticon Targetmasters: the leg stress marks (on the Nebulan’s), which lead to cracks and then breakage.  The 1987 Autobot Targetmasters don’t have this flaw. 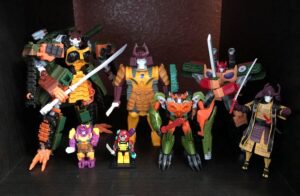 “To know your own limits, you must first know your foe’s limits.” The Transformer Samurai and Cybertronian martial artist is one of my favorites even if it is a Pretender.  I love the Samurai look.  A skilled and merciless warrior has seemed to go on too many solo missions and failed to return. As an example of how few of these are around; I probably get eight Bomb-Burst’s for every one Bludgeon. The photo is from a friend’s collection, if you have any single figure collections send the photo my way – I’ll probably use it! 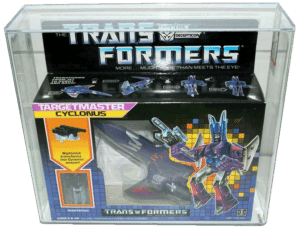 Another one of my favorites. “An emotionless marauder whose single-minded purpose is to destroy the Autobots.” That sounds fantastic!  A fearless warrior who is paired with Nightstick, a Nebulan master criminal.  Apparently the Nebulan is calling the shots now and is out pulling some heists.  It’s the only explanation! Those that survive are often broken with the same flaw Misfire’s Nebulan has. 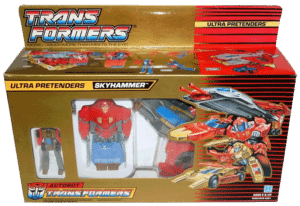 “There is no disgrace in not succeeding, only in not trying.”  Great credo!  If that is true, I dare everyone to try and transform him without breaking him!  Please don’t! I don’t want any, “I shouldn’t have done that,” messages.  Blessed, or I should say, cursed with Gold Plastic Syndrome (GPS), he’s not to be trifled with and is likely why so few have survived.  They were tossed in the circular file. He breaks with you just thinking about transforming him. You can read more about GPS here. 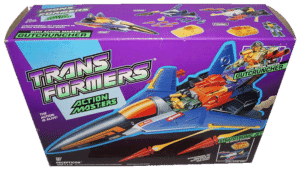 “Conquest of the Autobots begins with control of the sky!”  I think perhaps that’s where he went off to?  Disappearing in vast numbers, this 40,000 mph space faring jet must be hiding out on Junkion.  Without the instructions, you’d likely never know, but, it converts into a devastating battle station. The Action Masters don’t get a lot of love but Gutcruncher is one of the better ones. 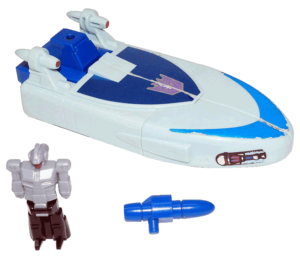 “Desolation follows in my trail.” He has extreme hatred of the Autobots and is partnered with the Nebulan Fracus whose temper is unequaled.  As leader of the Sweeps, this Decepticon tracker somehow took a wrong turn. Where this hunter destroyer ended up no one knows. Worse his Nebulan’s legs frequently break.  If you find one of these, leave the Nebulan be.  He’s temperamental. 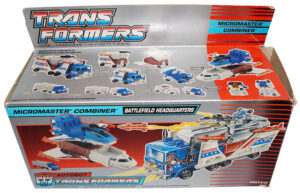 “Keeps the peace on land and in the air!” Full-Barrel and Overflow use size and power to destroy any Decepticon foolish enough to get in their way. The tractor trailer separates to make two rather unconvincing space craft.  They also combine to make a suborbital space station. Perhaps that’s where they went off too?  Not only are they MIA after 25 years, those that have survived are frequently in need of repair.  As with most white Transformers, they have a tendency to yellow.  Additionally, as with all the Micromasters, they tend to have rusty push pins on the wheels. Finding a nice one isn’t always easy. Learn how to restore your yellowed figures here.

Does this one count?  Does everyone even know it exists?  As a mail away I decided to include it.  It’s also included on my master Transformers identification tool. It lists all the vintage toys from 1984-1990.  So unless I change that list, it must be considered.  The watches that look like the Autobot symbol, he’s craptastic to most, but I like the little guy. The transformation is a little weak, press the mouth and watch the magic happen! The time is revealed!  To most, a little underwhelming today, but those who got one as a kid I bet were thrilled!  If you received one as a kid, toss out a comment if you loved this little guy or if you wish you had picked say Reflector or Downshift!

Let us know how we got it wrong!