In 1980, Schaper Toys introduced their vision for new motorized cars that featured a unique 4-wheel drive, Stomper 4×4. Even before Schaper officially launched the Stompers line, they created another line of motorized cars, the Hill Hustlers. However, that line pales in comparison to the Stompers.

Fans still remember and collect these vehicles. People loved them for their ability to transverse nearly every type of surface. To help support their off-road capabilities, Schaper released several playsets that featured ribbed and sloped surfaces.

Beyond featuring common 4×4 pickup trucks, this line featured hot rods, military vehicles, and work vehicles. There were even tanks in this toy line. So, consumers could find a Stomper that pleased any one of their aesthetic senses. For a full list of the Stompers toys, check out this site.

Testifying to the popularity of the Stompers, these toys also made their way into McDonald’s happy meals. So, fans could also find smaller non-motorized versions of their favorite four-wheel-drive vehicles.

Meanwhile, LJN decided to compete with Schaper Toys with their remarkably similar Rough Riders toy line. The similarities between these two lines were so close that Schaper sued them. Moreover, consumers confuse the two toy lines. However, Schaper reigned supreme both in the toy aisle and the court.

Later, after Tyco Toys acquired Schaper, they took over the production of Stompers. Thus, these 4×4 motorized vehicles continued production into the 2000s. Still, the first generations that Schaper Toys created captured the hearts of its fans.

Schaper Toys captured the general appearance of Nissan’s Datsun 280Z in this Stompers vehicle. Nissan only manufactured this vehicle for North America in 1975. However, like its earlier models, the Datsun had a long front end with a two-seater cab near the end of the car. This gave the Datsun cars a distinct profile that Schaper captured in toy form.

Unlike the real Datsun 280Z, Schaper mounted large all-terrain tires onto the motorized toy. So, while the original performed best on flat surfaces and the racetrack, this toy could take on any terrain thrown at it.

The Datsun 280Z came in a variety of colors. First, there was the orange version. Then, collectors could also find this vehicle in blue, yellow, or white.

When one thinks of a four-wheel-drive vehicle, Ford trucks often top the list. This is in part because Ford launched a campaign to let audiences know that their trucks are “built Ford tough”. So, the Ford Bronco is a welcome addition to any Stomper collection.

Ford first began producing full-size Ford Broncos in 1977, though a compact version has existed since 1965. Ford build this truck with the express purpose of being an off-road vehicle. Thus, this vehicle made a perfect candidate for Schaper’s toy line.

The Ford Bronco Stomper came in a multitude of colors and shades. For instance, there were the black, dark grey, and light grey variants. There also were blue and light blue trucks. Then, this vehicle came in yellow and red.

While the Sport Runabout 5-Speed (SR5) option in Toyota vehicles became a popular element of their pickup trucks, the option appeared in several other models. For instance, Toyota Corollas from the 1970s had an SR5 feature. However, people, especially around the 1980s, referred to Toyota’s pickups as SR5s since that was the most prominent emblem on the vehicle.

Toyota first began producing its pickup trucks in the late 1960s. So, by the time Schaper created their Stomper vehicles, Toyota’s trucks had cemented themselves as popular options. However, unlike the Stompers, Toyota’s trucks mostly had smaller wheels that did not dominate the profile of the truck.

As with many Stomper 4×4 trucks and vehicles, Schaper released the Toyota SR5 in multiple colors. Fans could pick up one of these trucks in blue, brown, green, red, tan, or white.

Who would not want to own an all-terrain vehicle that has the name Renegade? That name screams that it is meant to go off-roading. Likewise, Schaper Toys captured the Jeep Renegade’s appearance in their Stomper 4×4 toy line.

By the 1980s, Jeep had cemented its name as one of the top manufacturers of off-road vehicles. In fact, Jeep focused its efforts on SUVs, Trucks, and other off-road capable vehicles. Furthermore, they had been creating these vehicles since the 1940s. Thus, several of Schaper featured several of Jeep’s vehicles in their Stomper 4×4 toy line.

Fans of the Jeep Renegade could find their favorite truck in many assorted colors. The choice of colors was black, blue, gray, green, and orange.

Chevrolet also became a major producer of pickup trucks and other four-wheel-drive vehicles by the 1980s. Some of their earliest known pickups came out around the 1960s. So, Schaper smartly included multiple Chevrolet vehicles in their Stompers toy line.

Chevrolet’s history of building trucks began as early as the late 1910s. So, this company was one of the foremost producers of trucks. By the 1980s, trucks like the Scottsdale were capable of hauling on all terrains.

The Stompers version of the Scottsdale came in several colors. Collectors could find this vehicle in black, blue, green, and light green. Even after Tyco took over the production of these toys, the Scottsdale truck returned to the line as a McDonald’s toy.

Schaper smartly included several all-terrain tracks for their Stomper 4×4 vehicles to drive over. For instance, the Wild Mountain Set included two sloping inclines to mimic a rocky terrain that often appears around foothills and mountains. As with most other track sets, the wild mountain set could connect and chain with other Stompers tracks.

So, this set made a great centerpiece to any off-road Stompers playground. However, do be aware that this set featured foam pieces that were prone to cracking.

When one thinks of off-roading vehicles, Volkswagen does not often come to mind. Thus, it is a nice little treat to find a Volkswagen Baja Bug in Stomper 4×4’s line-up.

This little vehicle held many similarities to the popular Volkswagen Beetle, especially since it was a modified model. Originating in Southern California, the Baja Bug came about as a cheaper alternative to other dune buggies in the 1960s. Since these vehicles were all modifications, no standard version of the Baja Bug exists. However, the general idea of a bug with large off-road vehicles permeates most images of this vehicle.

Schaper only created two colors for the Baja Bug, blue and yellow. However, this vehicle will stand out in any Stompers collection.

When you have a collection of motorized 4×4 vehicles, you want to see how much weight they can tow. Schaper understood that their fans would want to test the abilities of their vehicles. So, they released the official competition pull set for their Stomper 4×4 toy line.

This set included a harness that would hook up to the underside of any given Stompers vehicle. From there, players could customize the load that their vehicles tow with the included weights. These weights could even hook up to the front of the harness, which helps lock the vehicle in place.

Furthermore, the bucket for the weights could move up and down the slope. Thus, users could place the weight either closer and higher up to their vehicle or further away, though lower.

As mentioned earlier, Chevrolet was one of the first producers of pickup trucks worldwide. So, it is no surprise that Schaper deemed it important to include multiple models of Chevy trucks in their Stompers toy line.

In this case, the Chevrolet Nomad was not a pickup truck. Instead, these vehicles debuted in the 1950s as station wagons. Some of the most iconic appearances of these classic cars included white tops that gave them a distinctive look. Likewise, Schaper featured white tops on two of the variants of this vehicle.

When it came to the Chevy Nomad, Schaper created three color variations. First, the blue version included the white top that many real nomads had. Similarly, the red version also included this white top detail. Finally, the yellow variant lacked the yellow top. Instead, it had red flame decals.

When you are looking for the ultimate playset for your Stomper vehicles, none outmatch the Devil Mountain playset. Where many of the other sets only included one or two slopes for their trucks to go over, this set featured an entire track. Instead, this set included both flat surfaces as well as slopes. Several of the track pieces in this set featured rough terrain to highlight the Stompers’ off-road abilities.

Moreover, this set included two three-hundred-and-sixty degree turn-arounds so that the fun could continue. Also, the bridge crossover featured interlocking sections that could bulge up once set down on top of things to add custom slopes and bumps into the track. Even the red sections with textured rough terrain featured twists and turns to keep the track interesting.

What were your favorite Stomper 4×4 vehicles and playsets?

While the Stompers toy line is no longer on store shelves, fans still remember this distinctive set of vehicles. Working Stomper 4×4 vehicles sell for significant amounts on eBay every day. Fans seek out their favorite vehicles to add to their collections.

So, we would love to hear from you and learn which were your favorite Stompers toys. Did you ever own a Stomper, or did you know someone who did? What types of terrains did you set your Stompers free on? Comment below to let us know!

Do you have old and used Stomper 4×4 toys?

If you have a collection of old and used toys, you can turn those toys into cash. There is no reason to let those old toys collect dust. Contact us today to sell your Stomper 4×4 toy collection.

Made in Collaboration with: 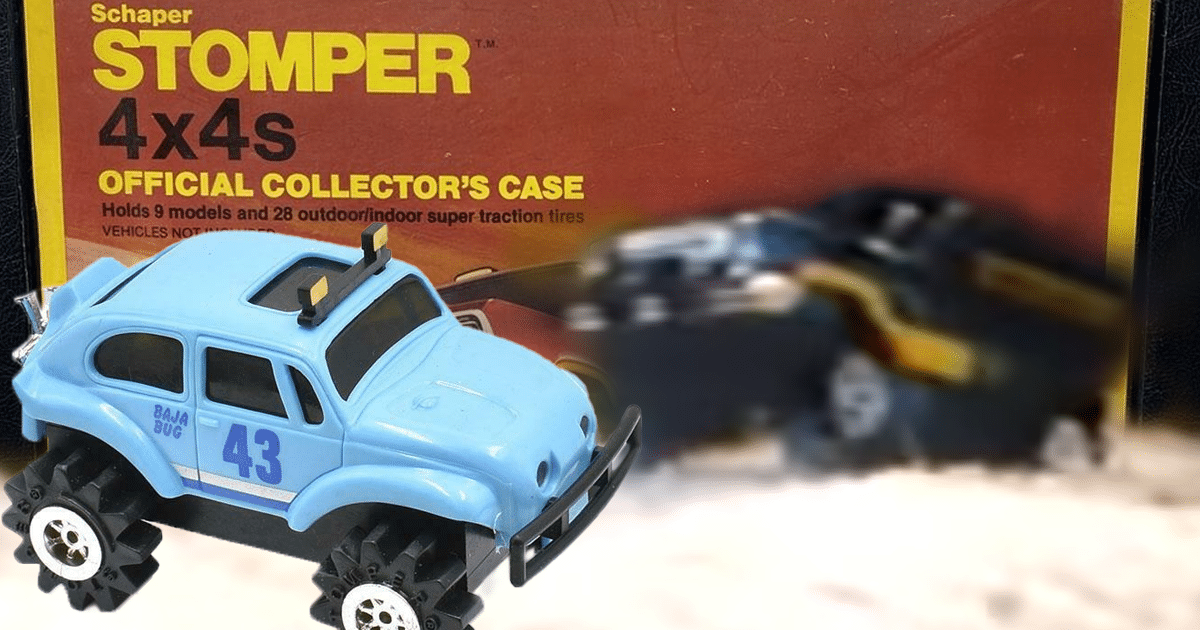