In 1991, Tyco joined forces with the National Highway Traffic Safety Administration to turn their successful PSA campaign into the Incredible Crash Dummies toys. Beginning in 1985, the NHTSA began running PSAs to encourage people to buckle up while riding in cars. These PSAs starred two crash test dummies, Vince and Larry. They also featured the voice talents from Jack Burns, for Vince, and Lorenzo Music, for Larry. The slapstick antics of these two dummies attracted the attention of children. Thus, Tyco entertained the thought of turning them into toys.

Unfortunately, the NHTSA only supported the new toy line for one wave, when the toy line carried the name Vince & Larry: The Crash Dummies. This departure occurred because the NHTSA felt that consumers would become distracted from their message, that people should buckle up, with the crash-style play of the toys. Thus, Tyco had to change the toy line’s name for the second wave, creating The Incredible Crash Dummies.

In 1992, Tyco expanded the Incredible Crash Dummies to include large dolls whose limbs flew off upon impact. These Crack Ups were soft enough that people could use them like foam bats or pillows. Thus, the advertisement openly showed children pelting each other with them. While the head, arms, and legs flew off on impact, they easily stuck back onto these dolls.

Notably, each doll came in a package that showed them buckled up. Thus, they continued to promote seat belt usage, even if Tyco no longer worked alongside the NHTSA.

When it comes to controversial toys from Tyco’s The Crash Dummies toy line, Hubcat and Bumper top the list. When these toys first popped up, they disturbed audience since they simulated running over cats and dogs. Even though the packaging advertised this pair as dummies with 9 lives, the visual still disturbed people. Still, these toys returned when Tyco rebranded the line as the Incredible Crash Dummies.

Bumper loved acting like a regular dog, doing things like sticking his head out of car windows. He was a crash dummy’s best friend.

Meanwhile, Hubcat should enjoy having many more than 9 lives as a crash dummy. However, he did not enjoy his job as a crash dummy since it made him nervous. So, he tried to hide each time he was supposed to crash.

Daryl has the distinction of being one of the few figures that crossed over from the Vince & Larry line to The Incredible Crash Dummies line. Tyco kept Daryl, Spare Tire, Skid the Kid, and the pets, Hubcat and Bumper, in the line when they changed the name. Since Daryl was a returning character, Tyco took the chance to change up his action figure.

Where the original figure wore a red jumpsuit, the updated version of Daryl wore a yellow, black, and orange Pro-Tek Suit. His new appearance made him look sportier than before. Also, Daryl now had an accessory, a monkey masher weapon. Thus, his Pro-Tek suit made him look like a member of a pit crew.

Somehow, Daryl’s profile indicated that working as a crash dummy was the uneventful part of his daily life. Meanwhile, he played bass in a heavy metal band during his nights. His riffs were so intense that they made his body fall apart to the delight of his fans. Moreover, his profile blatantly said that his brain was stuck in low gear, giving him a low I.Q. He then posed the question of who was dumber, him or those who did not wear seat belts.

Tyco first introduced Spin as Larry’s replacement after the NHSTA pulled their support away from the brand. By 1992, Spin gained a unique appearance that helped stand him apart from his predecessor. For the 1992 release, Spin wore an orange and yellow Pro-Tek Suit, with black lightning bolts on his upper chest.

Still, despite the new appearance, Spin kept the same buttons that Larry originally had. Thus, his limbs fell apart upon impact. Moreover, this figure now came with an orange accessory, the Junkbot Dicer.

Notably, when Tyco changed over the brand, they quickly changed Larry to Spin by painting him purple. During this time, they also reused the same profile and package art. However, they neglected to change his name to Spin on his nametag and mugshot. Thus, there are Spins from his original appearance that still have the Larry nametag.

After the NHSTA pulled away from the Crash Dummies toy line, Tyco had to rename their star dummies. Thus, Slick replaced Vince as one of the two headliners for the line. Originally, Slick wore a white test suit. However, when Tyco introduced the Pro-Tek suits in 1992, Slick’s suit became black and red, with a star on his chest.

This updated version of Slick maintained the same button gimmick that Vince originally had. Thus, he still fell apart upon impact, or button press, sending his limbs flying. Moreover, this new figure now came with a yellow accessory, the Bot Buster. This weapon, which resembled a wrench, made Slick ready to take on the Junkbot menace.

As with his partner, Spin, Tyco quickly converted Vince to Slick when they changed the brand name. Thus, Slick shared a profile and artwork with Vince. Unfortunately, since this transition happened quickly, Tyco neglected to change the nametag and artwork. Thus, some Slick figures still have a Vince nametag.

Tyco only released the Pitstop dummy to the Canadian market in 1991 as an exclusive to Canadian Tire. Thus, he was rare to find in the US market during the 1990s. Even now, he is still hard to locate.

Like the Daryl figure, Pitstop only featured one button on his chest. This button caused his head to pop up and spin. So, he did not break apart with the button. However, users could still pull apart his arms. Notably, he has the same blue color that the Larry toy had.

Pitstop was one of Slick and Spin’s buddies. As with many other dummies, he loved coming up with innovative ways to make crashes even more dangerous. He also shared the same slogan that Larry had, hoping that at least one person would use a seat belt. Aside from the clause about Slick and Spin, his profile copied Larry’s.

What use are crash test dummies and vehicles without a testing center to crash them in? Tyco understood that children would love to have a huge playset for their crash dummies. So, they made the Crash Test Center in 1991. This huge set came with multiple accessories, including cardboard barrier pieces. Additionally, many more pieces like jacks were present in this set.

However, the main event for this set was the red break-away wall that players could crash cars and dummies into. For dummies, the set came with a launch chair that could send individual dummies into the wall. Upon crashing against the wall, which prominently sported a bullseye symbol, the wall split apart into up to four pieces.

Alternatively, the set came with an impact zone that featured a bumper. So, users could test how their dummies would react to rear-end collisions. This impact zone also featured a working meter.

Tyco knew that their line of toys featuring crash test dummies would not gain traction without any vehicles for the dummies to crash. Thus, they included several vehicles that the dummies could drive and crash in.

Within the first wave of toys, Tyco released the Student Driver Stunt Car. This vehicle was blue with striping that resembled warning tape. In addition, there was a large yellow warning sign on the top of the car. While modern cars tend to sport more curves, this toy testifies to the box-like aesthetic for cars in the late 80s to early 90s.

Once this car impacts against a surface, like a wall, the front end buckled inward. The windshield also blew away on impact. Meanwhile, the front wheels also could fly off upon impact. The toy also featured a working airbag. Tyco designed all these features to snap back into place so that they could crash again.

Moreover, this vehicle included an exclusive figure, Axle, who easily sat in one of the vehicle’s two seats. Once seated, the user could buckle him up with the car’s working seat belts.

Larry was one of the original two spokesmen for the NHTSA’s PSA seat belt campaign. As such, he only appeared in the first wave of Tyco’s toy line, before the NHTSA broke off their contract with Tyco. On-screen, Tom Harrison played the Larry role while Lorenzo Music supplied the voice for the character. With Lorenzo Music’s voice talent, Larry gained a comedic tone, like cartoons that also featured Lorenzo Music’s voice.

Unlike his partner, Larry was a new crash dummy, though he still loved his job. According to his backstory, Larry enjoyed finding ways to make his crashes more demanding and dangerous. However, he also hoped to convince at least one person to buckle up to make his crashes worth it.

On the toy’s chest were two trigger buttons that would activate the toy’s break-apart feature. When children pressed the top button, his arms and heads sprung off his body. Meanwhile, the bottom button caused his legs to pop off. Since the toy’s limbs broke off, the lack of accessories does not detract from it.

As one of the original two dummies that came from the NHTSA’s PSA campaign, Vince only appeared in Tyco’s toy line during their first wave. In the PSAs, Tony Reitano wore the crash test dummy suit while Jack Burns supplied the voice. Jack Burn’s voice helped elevate the comedic nature of this crash test dummy and his slapstick antics.

Thus, when Tyco converted Vince into a toy, they built a profile that centered on his history as a crash test dummy. So, he became the dummy that had been doing crash testing longer than anyone. His profile mentioned that while he may gripe about his job, he would be the first to sign up to crash a car. As with most toys in the line, it posed the question of what excuse you have for not wearing a seat belt, since his excuse was that he was a dummy.

The toy featured two trigger buttons on the front of his grey jumpsuit uniform. While he did not come with any accessories, he did not need any. Tyco designed these toys to break apart as children pressed down on the buttons. Upon pressing down on the top button, Vince’s head and arms popped off. Meanwhile, the bottom button caused his legs to pop off.

Let us know which were your favorite Incredible Crash Dummies toys

Now that we have shared our picks for the top ten Incredible Crash Dummies toys from Tyco, let us know what you think. Do you agree with our list, or do you think other toys should have been on it? Share your thoughts on Tyco’s cult toy line.

Do you have old and used The Incredible Crash Dummies toys?

If you have a collection of old and used toys, you can turn those toys into cash. There is no reason to let those old toys collect dust. Contact us today to sell your Incredible Crash Dummies toy collection.

Made in Collaboration with: 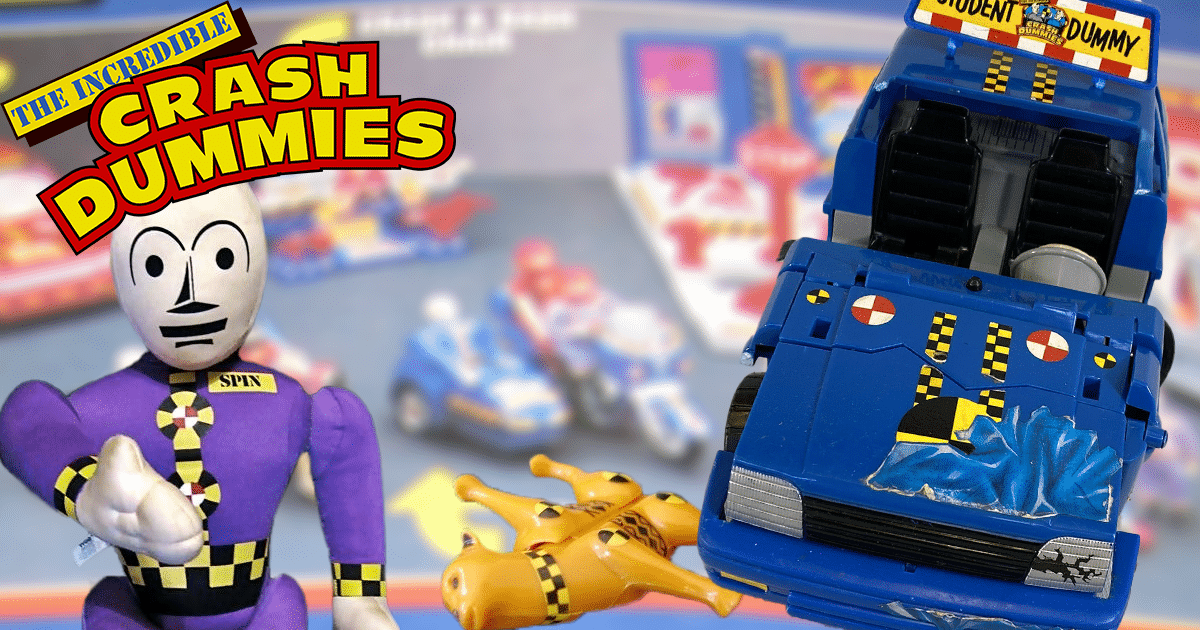