Even before Pierre Boulle entertained the world with his novel, La Planète des singes, Arthur P. Jacobs scooped up the rights to create the Planet of the Apes franchise. After the novel came out in 1963, readers received the chance to explore a distant world populated by advanced apes. Even though Boulle thought little of the novel, critics loved the novel’s wit and social satire. As many authors had done in the past, Boulle utilized the apes to embody humanity’s darker aspects. Some critics also compared to book to a Johnathan Swift novel with aspects of Jules Verne.

The novel followed the journey of Journalist Ulysse Mérou, who received an exclusive invitation to accompany two scientists on a groundbreaking space expedition. The wealthy Professor Antelle and his assistant Arthur Levain created a spacecraft that could travel close to the speed of light. Thus, they set out to visit a planet near Betelgeuse. Meanwhile, their vessel’s near-light speed travel created time dilation, so while they experienced two years in space, centuries passed on Earth.

Upon landing on the distant planet, the travelers found a strange world where Ape-like creatures had become the dominant species. These apes took over the planet since humanity used them as servants in the past. As the apes learned to talk, humans became lazy. Eventually, the apes pushed out the humans into camps before they attacked and subjugated humanity. While Ulysse shocked the ape society by talking and acting civilized, he quickly sought to return home. There, he found that apes had also taken over the planet.

Even though Arthur P. Jacobs picked up the rights to Pierre Boulle’s novel before its 1963 publication, it took years for him to convince Fox to greenlight the project. However, none of the production team had an inkling of how large the film would become. At the time, they believed it would perform moderately well at best, but feared it would flop. With that mindset, they made several changes to the novel and first drafts of the script. Ape society became more primitive as a means of cutting costs. However, they maintained the cutting twist that immortalized the film.

As Charleston Heston played the lead, George Taylor, he performed alongside a cast that wore extensive makeup. Each of the apes’ actors sat for hours in the makeup chair to achieve their proper look. By the end, they could fully emote, especially with their eyes visible.

Like the novel, George Taylor awoke from a long hibernation while his ship traveled at near-light speed. While his fellow astronauts, Landon and Dodge, survived the voyage, one of their companions, Stewart, perished. Unfortunately, Dodge soon perished as the group crossed paths with armed gorillas. Meanwhile, the apes gave Landon a lobotomy after capturing him.

Luckily only becoming a captive of the apes, Taylor proved his intelligence to Zira and her fiancé, Cornelius. However, Dr. Zaius decided to castrate Taylor, so the man escaped only to become a captive once more. Upon his recapture, he proved to the apes around him that he could speak.

With time, Zira and Cornelius helped Taylor escape to the Forbidden Zone to help prove that non-simian civilization existed. In the end, Taylor discovered the decrepit remains of Lady Liberty, coming to the realization that he had landed on earth.

Soon he met up with Taylor’s companion from the prior film, Nova. As he noticed Taylor’s dog tags, he decided to accompany her to Ape City. There, he learned that General Ursus planned to conquer the Forbidden Zone, despite the objections of Dr. Zaius. Unfortunately, a gorilla soldier spotted and wounded Brent, so Nova took him to Cornelius and Zira only for Dr. Zaius to catch them.

After escaping, Brent discovered the underground ruins of New York City’s Queensboro Plaza. With this discovery in mind, Brent realized he was on a post-apocalyptic Earth. He also discovered the ruins of St. Patrick’s Cathedral, where telepathic humans worshipped an ancient nuclear bomb.

After meeting with Mendez, the leader of the telepaths, Brent learned that some humans survived the nuclear holocaust. As they spent generations surrounded by the radiation, these humans had mutated so that they could control minds and create illusions, their bodies also changed, gaining pale skin and prominent veins.

Despite the group’s peaceful claims, they held both Brent and Taylor captive before forcing them to fight via mind control. As they escape the mutants, they rushed to stop the detonation of the doomsday bomb. Unfortunately, the apes shot down both Brent and Taylor, allowing the bomb to detonate.

Despite the lackluster critical response, Beneath the Planet of the Apes netted a small profit. Thus, a third film for the franchise, Escape from the Planet of the Apes, began production. As the prior film had definitively killed off both Taylor and Brent, neither Charleston Heston nor James Franciscus returned. Instead, this movie followed Cornelius and Zira as they escaped the destruction of Earth.

By salvaging and repairing Taylor’s shuttle, Cornelius and Zira along with Dr. Milo escaped the destruction of their planet. After traveling through a time warp, the ship crashed into the Pacific Ocean in 1973. So, this time around, human civilization surrounded this small group of Simians.

As Dr. Stephanie Branton and Dr. Lewis Dixon observe the escapees, the apes decided not to reveal their ability to speak. Zira quickly broke the pact as she spoke during an experiment while a gorilla ended Dr. Milo’s life. The apes then publicly proved their ability to speak at a Presidential Commission. While the pair became celebrities, officials like Dr. Otto Hasslein distrusted them.

His fear of the apes grew stronger as he discovered that Zira was pregnant. So, he convinced the government to rigorously question the apes about the rise of their civilization and the destruction of the planet. As he discovered that even Zira experimented on humans, he convinced the President to terminate her pregnancy before sterilizing the pair. As Cornelius began to fear the humans, he struck out and killed an orderly before the pair escaped.

With a manhunt underway, Zira gave birth to her son, Milo, at a circus. While there, she switched out her baby that of the circus’s ape. While the humans slew Zira, Cornelius, and the infant ape, Milo survived, hidden in the circus.

With the franchise still proving profitable, a fourth film, Conquest of the Planet of the Apes, came out in 1972. This movie revolved around the son of Zira and Cornelius, whose name changed to Caesar as Armando raised him in his circus. Meanwhile, humanity had adopted apes as pets since a pandemic wiped out all the cats and dogs in 1983.

After witnessing the harsh treatment of apes, Caesar accidentally revealed his ability to speak before hiding away per Armando’s instructions. Thus, Caesar hid amongst a group of orangutans whom the humans were about to sell as slaves. Meanwhile, Armando jumped to his death rather than reveal the truth about Caesar.

Upon learning about Armando’s death, Caesar began to secretly teach his fellow enslaved apes how to use weapons for combat. As the ape had lost all faith in humanity, he planned to stage a revolution. However, Governor Breck captured and tortured Caesar before he could begin his revolution.

As an African American, MacDonald, sympathized with Caesar’s plight, he helped the ape escape execution. After killing his torturers, Caesar began his revolution in earnest. Thus, he subdued the riot police as he set the city on fire. He also planned to execute Breck for his cruelty toward the apes.

While the movie originally ended with the execution of Breck, preview screeners became disturbed by the graphic content. So, they changed the ending so that Caesar’s girlfriend, Lisa, spared Breck’s life. However, Caesar warned the moment of mercy was only temporary.

With the franchise still squeaking by a small profit, a fifth and final film, Battle for the Planet of the Apes, hit theaters in 1973. This film continued to follow the exploits of Roddy McDowall’s Caesar as he helped build a new Ape society after a global nuclear war. In the years that passed since he escaped from Breck, Caesar began to desire peace between humans and apes. However, a new player, the gorilla general Aldo, sought to imprison and enslave humans.

As Caesar pondered if his parents could have guided him, the younger brother of MacDonald revealed that archived footage of Zira and Cornelius existed in the Forbidden City. As he set out to explore the Forbidden City, he discovered radiation-scarred mutant humans who followed Governor Kolp. While avoiding Kolp’s soldiers, Caesar located the recordings and learned the secrets of the future.

Upon returning to Ape City, Caesar discovered that he had to deal with two threats, the forces of Aldo and Kolp’s soldiers. Even worse, Aldo mortally wounded Caesar’s son, Cornelius, for spying on his forces. Still, Caesar first helped capture the mutant humans before he dealt with Aldo.

During Caesar’s confrontation with Aldo, Virgil revealed the role that Aldo played in Cornelius’s death. Since the gorilla had broken their most sacred law, the apes turned against Also. As Caesar chased Aldo up a large tree, the gorilla fell to his demise.

As these events proved that apes and humans were more alike than different, Caesar agreed to treat humans as equals. Still, they stored their guns for safekeeping, in case of future conflicts.

Do you have fond memories of the Planet of the Apes franchise?

In both the original novel and the films, The Planet of the Apes challenged humanity to examine their darkest natures. While each of the sequels garnered less and less profit, they still created a memorable narrative. They warned against the dangers of nuclear war, as well as our desire to subjugate others.

Still, we would love to hear from you. Did you watch The Planet of the Apes or any of its sequels? If so, what did you love most about these films? Let us know in the comments below.

Do you have old and used Planet of the Apes toys?

If you have a collection of old and used toys, you can turn those toys into cash. There is no reason to let those old toys collect dust. Contact us today to sell your Planet of the Apes toy collection.

Made in collaboration with: 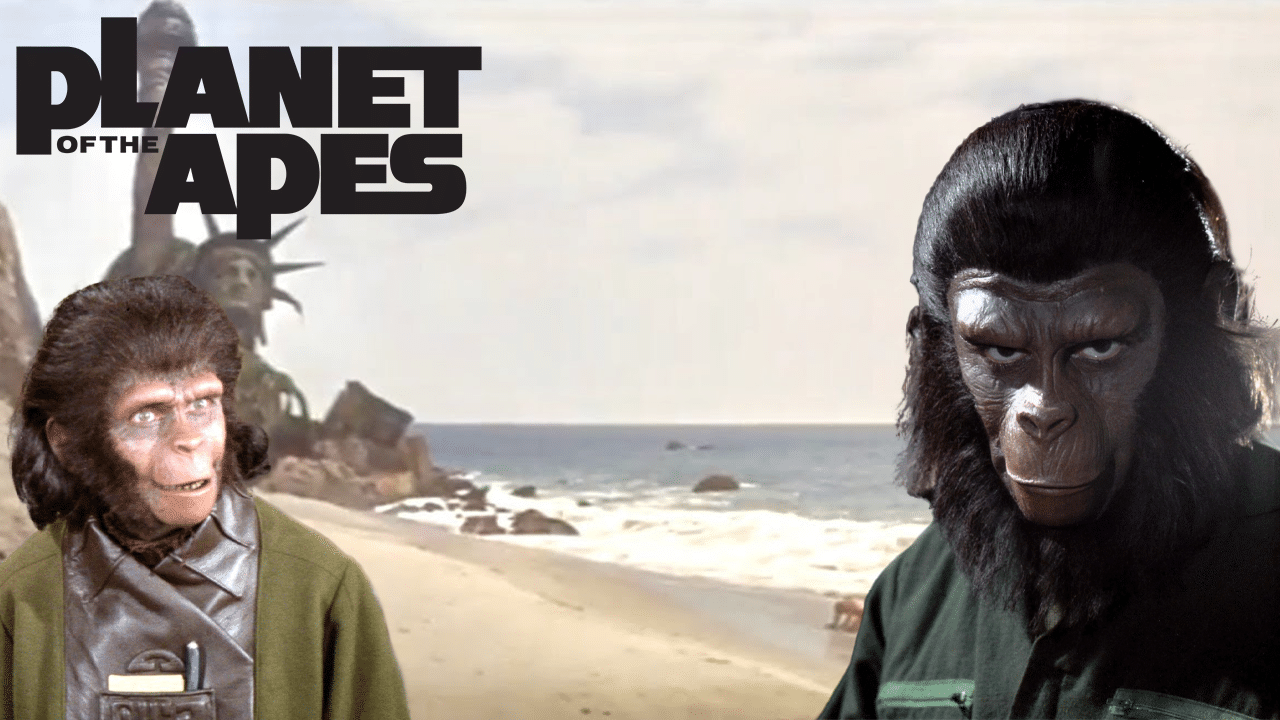