Vintage Toy Buys of the Week

After slowing down for a couple of weeks we are ramping back up again and posting our vintage toy buys.  Bring you some of the best vintage toys around.  We got some heavy hitters in stock this week, enjoy.

Thundercats toys were easily one of the bigger hits of the 1980’s.  Thundercats flee their dying planet, are then attacked by Mutants of Plun-Darr. Forced to stop they arrive on Earth. The Mutants relocate them and the battling ensues!

The battle between the task force Mobile Armored Strike Kommand (M.A.S.K.) and the criminal Vicious Evil Network of Mayhem (V.E.N.O.M.). Each mask worn has a special ability. The original toys have very clever gimmicks.

The conflict between He-Man and Skeletor is a mix of medieval and sci-fi tech. He-Man battles with Skeletor to prevent him from conquering Eternia.

First aired in 1988 and focuses on a battle between the heroic Valorians and the evil Rulon Alliance on a prehistoric Earth. The Valorians were a superhuman race, while the Rulons comprised several breeds of humanoid animals.

Kenner was the toy company lucky enough to land the Star Wars toy line making over 110 unique action figures produced and sold from 1977 to 1985. In addition to making countless creatures, playsets, ships, and vehicles to complement those figures.

With roots older than any other action figure, G.I. Joe spans back to 1963. G.I. Joe was a “mobile strike force”.  Their mission to protect America from threats, chiefly Cobra Commander and his Cobra army.

Matchbox partnered with Popy, a division of Bandai produced the initial Voltron figures. The only problem was that Matchbox had to tweak all the toys to make them safety compliant in the US.  Wonderful high-quality die-cast toys.

Godaikin name originates from “gokin” and “dai, which means big alloy.  Standing 10-12” tall the figures were impressive. By targeting a slightly older demographic this allowed them legally to keep their spring-loaded weapons. 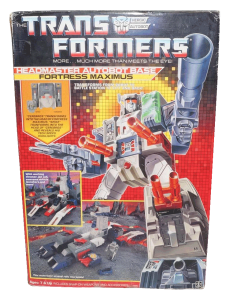 Transformers action figures were originally released in 1984 by Hasbro. The Transformers brand has been for sale ever since. Robots in disguise was a great concept. I hope you enjoyed this week’s vintage toy buys.

At Wheeljack’s Lab, we are both vintage toy buyers and vintage toy sellers. We currently have nearly 5,000 vintage toys for sale.

If you like prototype toys we recently received a massive vintage prototype collection.  This collection will be for sale within the next 2 weeks. The collection is from a Tonka Toys Executive who worked in the design department. We have Prototypes from many toy lines that were never released.  We have prototype toys from all Tonka toy lines in all phases of toy pre-production.