We are vintage toy buyers. We’re always on the lookout for the next great vintage toy collection. I’m sharing some of the collections we’ve bought recently.

The Super Powers toys were created and produced by Kenner in 1988. This line of action figures was based on the DC Comics characters. A rather large set of toys with a total of 33 action figures, 5 vehicles, and 1 playset released in all.

Teenage Mutant Ninja Turtles (TMNT) toys were released in 1987. The characters had their origins in comic books. Playmates Toys produced TMNT action figures. TMNT were among the most collected toys of the late 1980’s and early 1990’s.

Originally made in Japan by Takara. Hasbro licensed and produced the Battle Beasts collection of action figures starting in 1987. Battle Beasts were 2” animals with body armor. There were four series of toys released, along with several vehicles.

The Jurassic Park action figures and toys were first released by Kenner in 1993, with new releases for each new movie. The toys were based on the Steven Spielberg movies. The toys consisted of humans, dinosaurs, vehicles, and a playsets. The initial run of toys in 1993 consisted of 29 toys, making it a rather large line.

The first Six Million Dollar Man action figures were released by Kenner in 1975. The first figure was named the ‘Steve Austin Doll’. This doll featured many interactive features and gimmicks, including a bionic eye that the user could look through. His arm could lift items when a trigger on the back was pulled. Vehicles, playsets, and additional figures were produced soon after the first doll was released.

Hasbro released the C.O.P.S. n’ Crooks line of action figures in 1988. These action figures were released at the same time as the TV show “C.O.P.S.”. There were two different sides of characters, the good guys “cops” and the bad guys “crooks”.

Buck Rogers action figures were produced by Mego in 1978. This line of action figures was based on the movie. Mego sold the toy line for three years. Mego made basic 3 3/4″ figures, 12″ figures as well as vehicles.

The Bone Age toys were made by Kenner in 1987. It was a relatively short-lived toy line, with production ending in 1988. Kenner combined the building of a toy with legs (similar to building Lego’s) and mashed it with action figure type toys. A total of 20 toys were released. 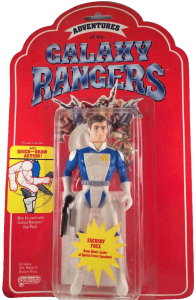 The Adventures of the Galaxy Rangers was a Space Western tv series. Galoob sold the line of action figures that was released in 1986. It was comparatively a small line with only six figures, three horses, and one accessory pack made up the entire collection.

Willow action figures were made by Tonka and released in 1988. Tonka’s release coincided with the movie produced by George Lucas. The Willow line was a 3” scale collection. Additionally there were 13 figures produced and came with additional riders, beast, and vehicles.