The Centurions were a line of action figures and vehicles produced by Kenner in 1986. The toys had adaptable and changeable weapons systems. Centurions were launched based on the popular TV show which consisted of 60 episodes.

Visionaries: Knights of the Magical Light TV show and the toy line were produced by Hasbro in 1987. The figures had hologram stickers on both their chests and staffs. One day the futuristic society’s technology suddenly stops working. Its citizens return to the use of ancient magic to survive. There were two factions that fight for power!

After the successful TV series, Mattel launched the toy line. Mattel’s original line of Battlestar Galactica action figures were released in 1978. The toys sold very quickly as the missile-launching toys were popular. Due to the death of a young boy, the toys were redesigned not to fire missiles; therefore, there are two versions of all the vehicles. One version fires missiles and the other does not fire. The ones that fire are worth significantly more.

Inhumanoids was a popular animated TV series in which Hasbro produced a toy line to follow in 1986. Inhumanoids was a series of ‘scientist action figures’ that had “glow in the light” features. Metlar, Tendril, and D’Compose were some of the popular figures in this series.

Bionic Six aired from 1987 to 1989. The toys were made by LJN beginning in 1986. The main characters are a family of machine-enhanced humans. They possess unique powers after being augmented with bionic technology. Each member has a specific bionic power, when formed together they make a superhero named Bionic Six.

After the production of the Disney classic sci-fi movie, Tron, Tomy went on to produce the toys and action figures in 1982. While a small toy line, they are very well made and designed to capture the essence of the movie. The movie didn’t do as well as expected, so only one series was released.

Sell Lord of the Rings Collectibles

In 1978 Lord of the Rings was released. Toymaker, Knickerbocker produced the toys and action figures. The line consisted of six figures and two horses: Aragorn, Frodo, and his Steed, Samwise, Gandalf, Ringwraith and his Steed, and Gollum. Very nicely done toys, albeit a very small line.

Crystar and the forces of order action figures and toys were originally sold in 1982. The Marvel Comics series was first published in the spring of 1983. The Crystar forces of order action figures were designed translucent to appear to be made of crystal. Moltar and the forces of Chaos were designed to be made of lava. Sixteen figures, playsets, and beasts made up the line.

Sell Clash of the Titans Collectibles

Clash of the Titans action figure line was launched by Mattel in 1980. The set featured only a few action figures and two creatures the Pegasus and Kraken. This set sold well but never expanded past the first 6 toys.

Dune the epic science fiction film was released in 1984. The line of the Dune action figures were produced in 1984 as well by LJN. The original film did not do well and neither did the toys. The toys were for sale for years and couldn’t be given away, which is unfortunate given they were well made.

The Rock Lords toy line was launched by Tonka in 1986. Rock Lords was a spin-off of the GoBots toy line. These figures are transforming rocks trying to blend into their surroundings. People tend to love them or hate them. Why not hide in plain sight.

Spiral Zone is a TV series that focused on an international group of soldiers fighting to free the world from a mad scientist. Tonka licensed the rights to Spiral Zones from Bandai and created the toy line, which launched in 1986.

Robotech was an anime TV series that launched in the United States in 1985. There were three generations of Robotech toys. The first generation was released in 1985 by Matchbox. 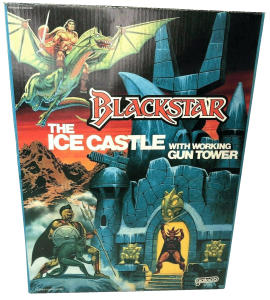 The Bravestarr action figure toys were based on the Filmation TV cartoon series. The figures were made by Mattel in 1986, a year before the TV series. Each figure had a unique gimmick.

LJN produced the Tigershark toy line in 1987. This line of action figures was based on the TV cartoon series. The figures have transformable heads, which flip up when a trigger on the arm is pressed. A small, yet desirable toy line.

The Black Hole was a 1979 science-fiction Disney film. Along with the film, an action figure line was produced. Mego came out with the line of action figures shortly after the movie in 1979. The toys were 12″, 8″ and 3 3/4″ sizes.