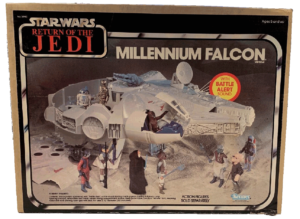 We seem to always get a few great Star Wars collections each week. Kenner produced Star Wars action figures, based on the original Star Wars trilogy. Kenner made over 100 action figures as well as ships, vehicles, and playsets. These toys were originally sold from 1977 to 1985.

Sell He-Man Masters of the Universe

We always have a good selection of He-man figures, due to their popularity in the 1980’s. He-Man and the Masters of the Universe first debuted in 1982. Mattel launched with the two main factions led by He-Man and Skeletor. They are supported by a vast array of action figures, beasts, vehicles, ships, and playsets.

Seemingly more popular now than then, or Thundercats just seem to be in short supply. LJN released the Thundercats action figures in 1985 accompanied by the cartoon. These action figures featured a fictional group of cat-like humanoids (the good guys) and an amalgamation of bad guy beasts.

One of my favorites are the Dino Riders. Dino Riders are prehistoric style toys that were manufactured by Tyco in 1987. This toy line focused on the battle between the good Valorians and the evil Rulon Alliance. There were several different sub-series that were eventually launched including the Commandos, Ice Age – Dinosaurs, and Ice Age – Humans.

Got a couple of clean collections of M.A.S.K. toys. The M.A.S.K. toy line ran for 4 years starting in 1985. The vehicles had hidden gimmicks designed to come out when combat ensued. Most vehicles came with one or more drivers, and their masks had special abilities. This was a fight between an underground task force M.A.S.K. and the criminal organization V.E.N.O.M.

Some of the best toys sold for USA distribution. The Shogun Warriors were large metal toys released by Mattel in 1978. These diecast action figures were from a series of imported Japanese. They came in a variety of sizes and represented multiple toy lines, even Godzilla.

Although a bit small in scale, they are some of the most clever toys ever made. Starcom: The U.S. Space Force is a 1987 animated TV series and toy line. The motorized toys were manufactured by Coleco. The best feature of Starcom toys was its magna lock technology. The action figures had tiny magnets inside their feet. These magnets allowed them to stand on their vehicles, ships, and bases.

The only toy line better than Shogun Warriors was Godaikin. Bandai released the Godaikin action figure line in 1982 after Mattel had previously tried to release Popy figures as Shogun Warriors in the late 1970s. Popy selected some of their most popular Chogokin figures for Bandai to release in 1982. The only problem was the price. Some were $75 in 1982 making them very expensive, but they are very high-quality toys.

A tough to find line toy line at the time, due to the figures coming out well after the first movie. We’re buying all Indiana Jones action figures and toys. Indiana Jones follows the adventures of Dr. Henry “Indiana” Jones, Jr. a professor of archaeology. These very popular action figures produced by Kenner were sold from 1981-1989. The series began in 1981 with the release of Raiders of the Lost Ark.

Another set we don’t see too often. In 1987, Kenner released the Silverhawks action figures along with the cartoon. Each figure had a companion and each character had an action or gimmick. The second series of figures are very hard to find.

Transformers, before Transformers. Small and quite affordable little robots. Quite plentiful today. Gobots are a robot toy line, produced by Tonka in 1983. Gobots toys were based on figures produced by Popy of Japan, although Tonka decided to make these sentient robots. The robot figures transform into a mixture of generic (unbranded) and specific (branded) vehicles.

Voltron: Defender of the Universe animated TV show was introduced in 1984 along with the great Voltron toys. The Voltron: Defender of the Universe toys we know came from two principal toys. The Go-Lion made up of 5 robot lions and Dairugger made up of 15 vehicles. These toys initially were made by Matchbox and later by Panosh Place. Panosh Place took the line in a different direction and expanded it greatly.

The only toy line made by 3 companies, Tyco, Filmation, and Kenner. The only ones ever being found (in large measure) are made by Kenner. The Real Ghostbusters action figures created by Kenner Toys were sold from 1986-1991. The line focused primarily on the toys from the animated cartoon series.

A great sturdy toy line always in short supply today. Sectaurs were a line of action figures and hand puppet insects produced by Coleco in 1984.