With Valentine’s Day just around the corner, we are looking forward to the romance between toy collectors and their greatest buys of used toys. Wheeljack’s Lab has been connecting old toys with new toy collectors for decades. So, we intend to continue to celebrate the old and used toys that come our way!

If you are interested in looking through our last set of awesome buys of old and used toys, check out the article here!

Younger generations may only remember Battlestar Galactica as the re-imagined series that ran for 4 seasons in the mid-2000s. However, the series originally gained fans during the run of the original television series in 1978-79. In this series, the public first met the threat of the Cylons, robots who were determined to take out humanity. 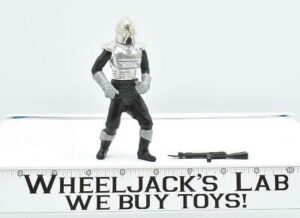 Do you know who buys your Used Series 2 Battlestar Galactica Toys?

Luckily for Mattel, Battlestar Galactica remained popular through 1979. Thus, the company produced a second series of toys for the masses to collect. Unfortunately, this series was in some ways smaller than the prior series.

Series 2 consisted of only 4 action figures:

Luckily for fans of Battlestar Galactica, Mattel also produced several 12” figures as well as some gift sets in 1979. So, collectors were able to get their hands on:

So, fans who had missed out on the first series were once again able to buy their favorite characters.

Do not let your old and used toys gather dust, contact Wheeljack’s Lab to sell your toys for cash!

We are always on the lookout for the newest and greatest buys in vintage toys. Since Wheeljack’s Lab has over 3 decades of experience selling and buying used toys and action figures, you are certain to get the best value for your collection. Moreover, we are quick to respond and will cover most shipping costs.

Bio: I am the founder and owner of Wheeljack’s Lab pop Culture and Toy Shop. My vision has always been to reunite customers with their favorite childhood toys and pop culture, triggering fond memories, and reigniting their imaginations. Every day, I work in the “lab” where it is Christmas 365 days a year. I scour the internet, like when we had the Sears Catalog of yesteryear, for the next great treasure. Then, I await the arrival of the postman as if he were Santa Claus himself and helping collectors worldwide with their versions of Christmas. Every day as a vintage toy buyer is an absolute joy!