Welcome to a new month of 2021, followed by a new set of the greatest buys of vintage toys. Lately, we have received a huge shipment of toys, especially from Tonka’s Spiral Zone. So, let us celebrate this shipment today.

If you are interested in looking through our last set of awesome buys of vintage toys, check out the article here!

In the late 80s, there were many inventive and imaginative cartoons on the air. Unfortunately, Teenage Mutant Ninja Turtles enamored the minds of most audiences, so gems like Spiral Zone were not as recognizable. However, Spiral Zone is still a cult favorite amongst the fans who have watched it.

Atlantic/Kusher-Locke produced Spiral Zone, a science-fiction cartoon, in 1987. This show ran for a total of 65 episodes in a single season. So, there was a plethora of content for children to gobble.

Originally, the series was based in part on a toy series that Bandai produced in Japan, SF Spiral Zone. When the toys came to the States, Tonka licensed the rights to the toy series. Thus, American collectors know Spiral Zone as a Tonka property.

The 1987 Spiral Zone Toys Produced and Sold by Tonka

Tonka released the entire run of Spiral Zone toys in 1987. Within this run, there were several categories of toys. Rather than rerelease the Japanese Bandai toys to US consumers, Tonka developed their line of Spiral Zone figures. Thus, the action figures produced from Tonka were incompatible and stood out from their Japanese counterparts.

Tonka’s Spiral Zone toys can have a few classifications. 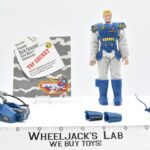 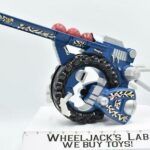 Tonka also released a series of suits and accessories to go along with the action figures:

Are you looking to sell your Spiral Zone Collection?

If you have a collection of Spiral Zone toys that are sitting around and collecting dust, do not let the opportunity to make money pass you buy. Wheeljack’s Lab is here to buy your vintage toys like Spiral Zone. We have the experience and knowledge to give you the best price for your vintage toys.

Are you interested in the creation of your favorite Spiral Zone Toys?

We not only love buying and selling toys, but we also love sharing information like the prototype creation process for your favorite vintage toys. Within the past year, we had received a generous shipment of prototype and pre-production toys from one of Tonka’s former executives.

If you are interested in learning more about the production process, check out our article on how toys are made from concept art to final production. Meanwhile, if you would like to check out the Spiral Zone prototypes and pre-production toys, head over here. Do not miss out on this exclusive look at the production of your favorite toys.

For buyers of vintage prototype toys, sign up for notifications on when we put up these prototypes for sale. Do not let these exclusive figures pass you by!

We are always on the lookout for the newest and greatest buys in vintage toys. Wheeljack’s Lab has over 3 decades of experience selling and buying used toys and action figures. So, you are certain to get the best value for your collection. We are quick to respond and will cover most shipping costs.

Bio: I am the founder and owner of Wheeljack’s Lab pop Culture and Toy Shop. My vision has always been to reunite customers with their favorite childhood toys and pop culture, triggering fond memories, and reigniting their imaginations. Every day, I work in the “lab” where it is Christmas 365 days a year. I scour the internet, like when we had the Sears Catalog of yesteryear, for the next great treasure. Then, I await the arrival of the postman as if he were Santa Claus himself and helping collectors worldwide with their versions of Christmas. Every day as a vintage toy buyer is an absolute joy!