What makes a must have?  To me if you collect a variety of action figure brands and want to have just the highlights of each brand then these are the highlights. So let’s roll into it.

This is one big combiner at about 12” tall.  He is a near perfect Decepticon fighting machine, an unequalled hunter and dangerous warrior with no known weaknesses.  Predaking is the fusion of 5 Predacons:  Divebomb, Headstrong, Rampage, Razorclaw and Tantrum.

Variations:  He comes in two vintage variations.  One being all plastic and another that has maybe 10% metal, which is much heavier and more desired.

What to watch out for?  The tabs (that hold Headstrong and Tantrum on) frequently break off on the leader Razorclaw and are hard to see in photos.

If we are to think about Dinosaurs for a moment, which comes to mind?  Naturally I think most would say a T-Rex.  Why not have a T-Rex who’s an Autobot that acts more like a Decepticon in your ranks?  He is the powerful leader of the Dinobots who’s of good moral fiber, but resents authority.  Grimlock values strength above all else.

What to watch out for?  That would be that the tail sometimes cracks, which is well hidden when it does.

The all-American-boy Autobot who dreams of being heroic and important. He tends not to follow rules. His impatience and impulsive behavior often gets the better of him, but he is always a brave fighter.  He is well meaning, even if he is headstrong.

Variations: He comes in three vintage variations – one that is all plastic, one that has metal toes and a third that is a Targetmaster version.

What to watch out for?  He can develop stress marks around the engine under the hood.

All the 1984 exotic sports cars look pretty good, but a nice solid white car always looks choice.  “Never do what your enemy expects you to do” is Wheeljack’s motto!  Wheeljack is the Autobot mad scientist. He is always inventing new weapons and gadgets.  In the process, he is often his own worst enemy while producing those weapons upgrades!

What to watch out for?  He has a tendency to be missing his head as the post to hold it on was ever so slightly undersized.

Who doesn’t need the fastest Autobot on their team?  Better yet, why not one that breaks down on you in a pinch? LOL.  While beautiful, he’s prone to mechanical failures due to the cutting edge technology he employs.  So add to your collection with caution.  Unfortunately, once a Decepticon, he hasn’t gained the full trust of his Autobot teammates.

What to watch out for?  Broken head antenna are common, as are arms holding on by a thread and the worst are the shoulders that are broken, but can’t be seen in jet form. 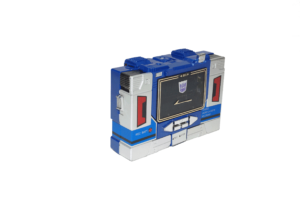 Here we have the sadist of the group, “Cries and screams are music to my ears.”  He’s one absolutely stunning looking Walkman when in mint condition.  “It is said Soundwave can hear a fly sneeze…..even reads minds by monitoring electrical brain impulses.” As Megaton’s most reliable troop he will not hesitate to use what he learns as blackmail to keep himself in high regard to Megatron. This makes him not the most popular amongst his Decepticon comrades.

What to watch out for?  He has a tendency for loose joints, primarily in the hips, which make him hard to stand.  He also frequently has a broken tape deck.

One fine looking McDonnell Douglas F-15 Eagle attack jet who is always seeking to oust Megatron as leader. He is “ruthless, cold-blooded, cruel… considers himself the most sophisticated and handsome of Decepticons.” As a jet he just might be!

What to watch out for?  Mostly, when you do buy one, be sure they either over pack it or remove the rear blue wings as they are very brittle from age. However, taking the rear wings out is no simple task for a novice, as that causes just as many to break.  It’s a slow process as they do not want to come out.

A shout out to my personal favorite character! The picture above is a sample from a friend’s collection. The picture is just fantastic so I thought I’d include it.  The vintage one is dead center in the back. Shockwave is second only to Megatron in power.  He is the Deception’s military commander. Shockwave uses cold logic only, with a great voice actor too.  He employs a cold, brutal, scientific approach to war.

What to watch out for?  Can I just say everything?  They have lots of issues, literally about everything breaks on these.  If the chest pops, it’s basically the death nail.  Make sure to have the electronics tested and to have them extend the legs to ensure they hold. These need extra protection in shipping.

“Autobots roll out!” Here we roll in with the Autobot Commander.  He’s the biggest, strongest and wisest Autobot.  A leader that leads by example and an on the field General.

Variations:  Several versions exists with the highest priced one being a trailer with metal plates, often referred to as the “grey,” “bloated,” “metal,” or “Diaclone” version. There is also a “light blue” variation as well, which also commands about double the standard version price.

What to watch out for?  You may find the scout car eject button being broken, trailer door busted off or Prime’s legs being loose to the point of being impossible to pose in robot form.

The Walther P38 looks stunning when the chrome is mint, these just pop!  The Decepticon leader made of equal parts ruthless, relentless, cunning and tactician with no weakness.  Shouldn’t everyone have a toy gun that looks real on their desk, in the den or man cave? Photographed on a stand I made; message me if you’d like one.

What to watch out for?  The biggest issues, that are less obvious, are the right arm will be broken but still attached.  That’s also true of the gun barrel.

Feel free to send comments and tell me how I got it all wrong!