The Transformers is a successful toy line that features giant robots that transform into various vehicles and creatures. Initially, a Japanese toy-producing powerhouse, Takara, produced the Diaclone toy line. However, when Hasbro bought the license to produce the toys in the west, they reimagined the series as the Transformers.

Following the financial success and the wild reception the toy line received, Hasbro bought the toy line from Takara. So, they became the sole owner of The Transformers toy line. This move also later included the ownership of the entire media franchise.

The Transformers toy line went on to become one of the most successful media franchises in the world. It has animated television series and cartoon shows, comic books, movies, and video games.

The Transformers action figures feature two main factions; The good robots called the Autobots, and the bad robots called the Decepticons. All the Transformers toys transform either from one firm into a robot action figure. This second form tends to be either a vehicle, device, creature, or even an aircraft. However, there have been a few releases, like the Action Masters, which do not feature this transforming action.

Since its inception in 1984, Hasbro has released Transformers toys in series, with many toys and action figures produced and distributed worldwide.

The Powerglide action figure is a mini vehicle because of its size in comparison to the other Transformers vehicles in the series.

Hasbro released Bumblebee in 1984 as part of the first series of the first generation of Transformers toys. The Autobot action figure was a Volkswagen Beetle mini car transformer that changes into a mini robot. Meanwhile, the action figure features an Autobot sigil on the roof in the car mode then on the chest in the robot mode.

Bumblebee is one of the Transformers action figures with the most variations, including red and blue colors and the popular yellow color. The Bumblebee action figure has limited points of articulation, so it is not very poseable.

Hasbro released the Cyclonus action figure in 1986 as part of the third series of the first generation of the Transformers toys. Unlike the prior toys from the toy line, the animation team first designed Cyclonus as a Decepticon character in the 1986 Transformers movie. Then, Hasbro took that design to create the action figure that they released in the same year to ensure Transformers fans were familiar with the character.

The action figure could transform into a purple colored Cybertronian fighter jet. The Cyclonus action figure has limited points of articulation, with its most outstanding feature being its foldable back wings.

Hasbro released the Abominus action figure in 1987 as part of the fourth series of the first Generation 1 toys. This combiner was one of many that used the scramble city system for assembling the larger figure. These designs featured five robots, with one larger robot set to be the torso, which would form a larger robot.

While the Abominus box set only sold in Japan and Italy, the Decepticon action figures forms when the five Terrorcons, which sold separately, combine. To build the Abominus action figure from the Terrorcons, Hun-Gurr serves as the main body with all the other four Terrorcons forming its limbs; all you must do is attach Abominus’ head, feet, fists, and its absurdly huge chest plate.

Hasbro released the Defensor combiner set in 1986 as part of the third series of the first generation of the Transformers toys. They released and sold the Defensor action figure both separately and as a box set.

So, the figure could also form through the fusion of five separate Protectobots, including Hot Spot, which serves as the main body. The Blades and First Aid serve as the arms, and then the Groove and Streetwise both serve as the legs. The joining together of all these figures form the Defensor action figure, which has two laser rifles.

The Defensor action figure has a few points of articulation which aids the figure’s ability to pose.

Hasbro released the Decepticon combiner set, Menasor, in 1986 as part of the third series of the first generation of the Transformers action figures. This toy comes with many accessories to aid the box set figures to transform into the Menasor. These accessories include a scout car that becomes the breastplate, waist armor, a cyclone rifle, a sword with the action figure’s mask, and other accessories.

Menasor could also form by gathering all the Stunticons individually and joining them together with Motormaster serving as the main body. All the other Stunticons adds up to the limps to form the Menasor.

Menasor possesses a few points of articulation which makes the action figure quite poseable.

The action figure comes with many accessories, including multiple laser rifles, two laser cannons, a Radar Scope, Photon Rifle, Grommet, Gasket, a Spike Headmaster unit, and Cerebros Headmaster unit. Unfortunately, two of his accessories are region-specific. First, the Japanese release came with both the Master sword and Cerebro’s sword.

This action figure is one of the few Transformers action figures that have electronic light and sound effects. To activate the electronics, the user must pull on the figure’s trigger in the Cybertronian gun mode. A 9-volt battery powers this effect, and the figure consists of only two distinct blaster sounds.

Hasbro released the Megatron action figure in 1984 as part of the first series of the first generation of Transformers toys. The Decepticon leader comes packed with some accessories, including a silencer, a stock, a telescopic sight that also serves as a fusion cannon, and an infrared laser cannon.

The Optimus Prime action figure comes with a laser blaster, two fists, four deplorable rockets, a fuel pump and nozzle, and a trailer that also serves as a Combat deck. It consists of two missile launchers, a rotating radar dish, a rising repairing pod, and a launchable scout vehicle that releases from a spring-loaded ramp.

The action figure can transform into the truck cab and vice versa. While the action figure is in its robotic form, Optimus Prime consists of a few points of articulation which limits the figures posing options.

With the success of Generation 1 in all formats, from comics to cartoons to toys, there are hundreds of Transformers toys to choose from. The franchise is still going strong and producing excellent toys even to this day.

Do you have old and used Transformers toys?

If you have a collection of old and used toys, you can turn those toys into cash. There is no reason to let those old toys collect dust. Contact us today to sell your Transformers toy collection. 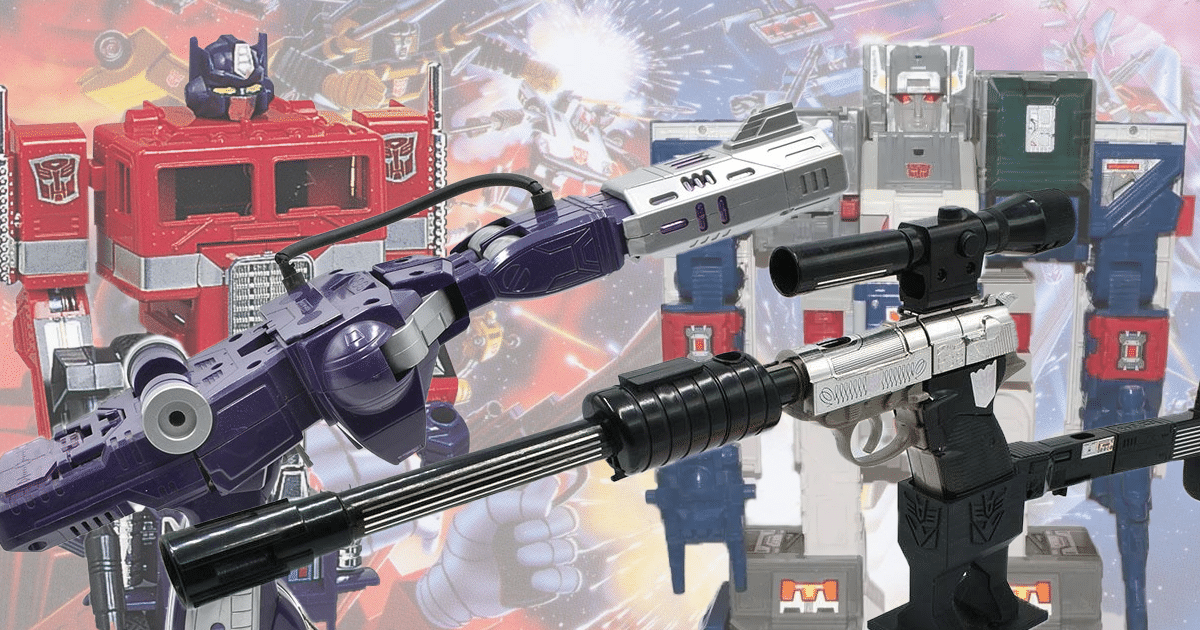