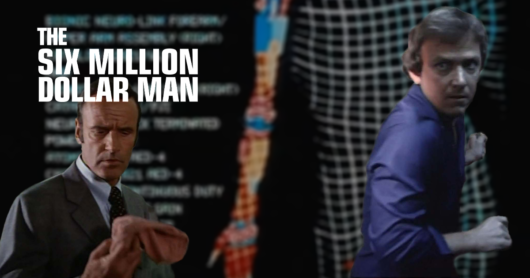 Few who grew up in the 1970s never heard of the Six Million Dollar Man as the show dominated the airwaves for five years. This series’ rise to prominence began with the success of Martin Caidin’s 1972 novel, Cyborg. Like the television show, this book followed Steve Austin as he became a cyborg following a […]

Following the success of Martin Caidin’s sci-fi novel, ABC began production of an adaption for network television. Originally, they aired three made-for-television movies that introduced Steve Austin to the viewing public in 1973. With the rousing success of these three movies, the property quickly transitioned into an episodic show mid-season in 1974. This show continued […]

Taking notes from the recently released novel, Cyborg, the Six Million Dollar Man entertained audiences from 1974 to 1978. In his 1972 book, Martin Caidin dreamed up a world where a US test pilot, Steve Austin, could receive bionics to survive a crash. This novel’s popularity spawned both ABC’s live-action show, but also a series […]