Both the show and the toy line primarily targeted a young female audience. The show would also serve as a marketing vehicle and an advertising medium for the toy lines. Filmation alongside Mattel created the She-Ra character. Then, they integrated her into the Masters of the Universe franchise so the show would serve as a spin-off of the He-Man: Masters of the Universe animated television series.

Filmation created She-Ra: Princess of Power in 1985, and it ran for 93 episodes across two seasons. The show also produced a reboot show in 2018 titled She-Ra and the Princesses of Power which includes 52 episodes over five seasons. `

Join us on a retrospective on She-Ra: Princess of Power

Locating the Wielder of the Sword of Protection

The series sets off with the Sorceress of Eternia telepathically calling on to Prince Adam (He-Man). She sends him on a mission to planet Etheria to find the person worthy to wield the Sword of Protection. Prince Adam traveled to Etheria through a portal accompanied by his pet cat Cringer.

On arrival at Etheria, Prince Adam learned about the Great Rebellion, hoping the one who would wield the Sword of Protection would be in the group. He hurried to meet them. However, he was disappointed as none of the members of the Great Rebellion had any effect on the sword. Prince Adam began his search for the chosen one. On his way, he encountered some Horde soldiers and quickly disposed of them to continue his quest. Prince Adam soon met a platoon of Horde soldiers, this time led by Force Captain Adora.

When Prince Adam met Adora, she was Force Captain who the Horde had manipulated. So, she had no idea of what is going on. Soon after their meeting, they began to fight against each other. However, when Prince Adam attempted to use the Sword of Protection to strike Adora, he noticed that the Sword resonated with her. Thus, he immediately realizes she is the chosen one destined to wield the Sword of Protection.

The Birth of She-Ra

On arriving back at the Horde base, Captain Adora had some questions and went to Hordak for answers. However, Hordak instructed the witch, Shadow Weaver, to brainwash her. So, she forgot the events of the day. On the other hand, the Great Rebellion freed Prince Adam only for Horde Soldiers to quickly recapture him.

Afterward, Adora began to have doubts about the intentions of Hordak and the Horde Soldiers. She left the Horde base to see for herself. She witnessed the cruelty the people were suffering from the Horde forces. Captain Adora returned to the Horde base heartbroken, but there was nothing she could do about it. Prince Adam encouraged her to help liberate the people by accepting the Sword of Protection. Its magic was strong enough to break the evil Shadow Weaver’s spell on her.

Captain Adora gave in to the appeals of Prince Adam. She held the Sword of Protection aloft and declared, “For the honor of Grayskull; I am She-Ra,” just like Prince Adam used to transform into He-Man, Adora transformed into She-Ra.

In that instance, Arora received a revelation about her origins. Initially born to King Randor and Queen Marlena, the rulers of planet Eternia, Princess Adora is the twin sister of Prince Adam. Unfortunately, the evil Hordak and his former apprentice, Skeletor, abducted the infant princess. Hordak then took her to the planet Etheria where he raised her through the ranks of the Horde army.

Defending Etheria against the Horde

Prince Adam led her home to the planet Eternia where she met her parents and the rest of her family. Princess Adora explained she could not stay on Eternia, and she would like to return to Etheria to help free the inhabitants of Etheria from the Horde’s grasp.

Princess Adora returned to Etheria with her newfound powers and abilities and assumed the position as the leader of the Great Rebellion, fully ready to wage war against the Hordak and the Horde forces.

SHE-RA AND THE PRINCESSES OF POWER

Released as a reboot to She-Ra: Princess of Power, She-Ra and the Princesses of Power is an action, adventure, comedy, drama, science fantasy, sword, and planet-based animated television series that premiered on November 13th, 2018, all through to May 25th, 2020. The series has 52 episodes that spread across five seasons. Although this series kept the name of most of the characters from the original, She-Ra animated television series, the plots and storylines are entirely different from that of She-Ra: Princess of Power. Some fans argue that this storyline is better than the previous one and even more mature.

The overall plot of Netflix’s She-Ra

The animated television series is based on the life events of two young girls, Adora and Catra. They were both orphaned early in their lives. After Shadow Weaver took them in, she raised the pair as soldiers in the evil Horde Force. Being just the two of them, they grew close and became best friends. Knowing nothing else, these young girls followed the leader of their Horde unit, Hordak, an evil warlord with his life ambition of conquering the planet for himself.

One day, Adora inadvertently found the Sword of Protection in the woods one day while trying to find her way out after previously losing her way. As she held the Sword, she transformed into She-Ra, the legendary Princess of Power.

With her newfound powers and abilities, Adora began to realize how evil the Horde is and how she and the rest of the Horde soldiers had been inflicting pain and suffering on the people of Etheria. Adora subsequently abandons her responsibility as a Horde soldier. She swears her allegiance with the Rebellion, a group that tries to oppose the Horde’s reign on Etheria.

Adora’s defection, however, did not sit well with her best friend, Catra, who felt abandoned and betrayed by Adora. This feeling eventually grew into hatred in Catra and went from Adora’s best friend to her greatest enemy. Adora also contributed to the rebirth of a league of magical kingdoms governed by magical girls called the Princess Alliance, which also stands with the Rebellion against Horde’s forces.

The She-Ra and the Princesses of Power animated television series are based on the struggles of the Rebellion, assisted by the Princess Alliance and She-Ra against the Horde’s forces that are terrorizing their planet. Some aspect of the series also centers on the rivalry between She-Ra and Catra.

The first season showed the origin story of Adora and her transformation into She-Ra. It also depicts Adora’s effort in uniting the Princess Alliance and their vital role in defending the Bright Moon, which was the Rebellion’s base of operations, against the attacks of the Horde forces. Catra also climbed the ranks up to Hordak’s second-in-command among the Horde forces.

The second and third season depicts the actions of Hordak who plans to bring his Creator, Horde Prime, to Etheria by building an interdimensional gateway that would give the evil villain access to this world. Catra activated the interdimensional portal, and it proved too powerful, even threatening to destroy the planet. The Rebellion leader, Queen Angela, had to put herself on the line to save the planet and close the portal.

The fourth season centers on the revelation that Adora’s Sword of Protection is also a key to an Etherian ancient superweapon. Glimmer attempts to use the superweapon against the Horde forces in catastrophe as the planet became vulnerable to attacks. In a bid to curb the damage done, Adora destroyed her Sword, thereby losing her powers. Horde Prime took the opportunity to introduce himself by abducting Glimmer, Catra, and Hordak.

The fifth and final season began with Adora’s rescue of Glimmer and her old friend Catra from Horde Prime. She recovered her lost powers in the process. Meanwhile, Horde Prime had telepathically conquered a lot of Etherians and was on the verge of using the ancient Etherian superweapon against them when She-Ra rose and destroyed both the ancient superweapon and Horde Prime, liberating the whole planet from his grasp.

Through the decades, She-Ra has fascinated the minds of girls across the world. Both versions of the character have invited women to embrace their femininity and turn it into power. While the definition of what makes a woman strong has changed over the decades, the message remains the same.

Do you have old and used Masters of the Universe toys?

If you have a collection of old and used toys, you can turn those toys into cash. There is no reason to let those old toys collect dust. Contact us today to sell your Masters of the Universe toy collection. 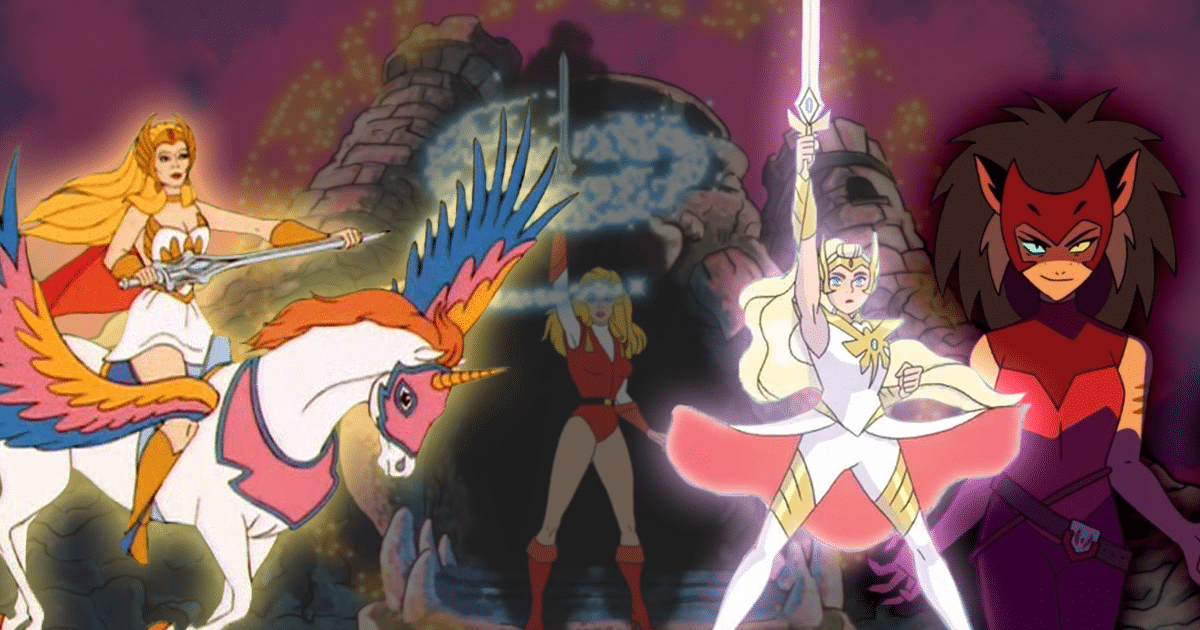 Description
Join us on a retrospective on She-Ra: Princess of Power, the Masters of the Universe spin-off from both Filmation and Netflix productions.
Author
Chris Ingledue
Publisher Name
Wheeljack's Lab
Publisher Logo